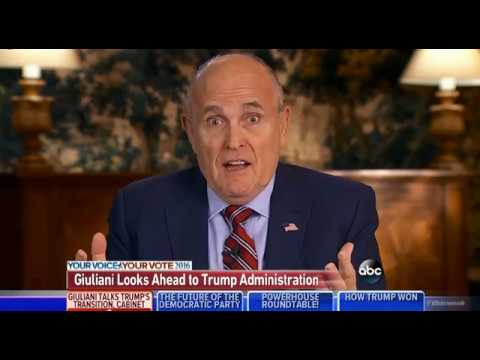 Donald Trump adviser Rudy Giuliani said “there’s no perfect way” for the president-elect to deal with his billions in business assets, but on Sunday encouraged Trump to put his money in a blind trust “for the good of the country.”

No matter what Trump does, Giuliani said, “there will be a wall” between Trump’s decisions as president and his financial interests.

Trump says he’s worth $8 billion, although Forbes magazine says that’s closer to $3.7 billion. His empire is made up of more than 500 companies around the globe, including more than 250 bearing his name, according to ABC News. Critics say that makes him susceptible to conflicts of interest.

“For the good of the country, and the fact you don’t want a question coming up every time there’s a decision made, he should basically take himself out of it, and just be a passive participant in the sense that he has no decision-making, no involvement,” Giuliani said on ABC’s “This Week.”

“And those decisions get made separate from him, which is the way it’s done for most cabinet offices.”

On the campaign trail Trump said that, if elected, he would turn over his business interests to his children.

But Jake Tapper grilled Giuliani on CNN’s “State of the Union,” saying that wasn’t enough separation, especially because Trump’s children were still advising him on political matters.

“It’s kind of unrealistic to say that you’re going to take the business away,” Giuliani responded. “You’ll have to fashion something that is very comfortable, very fair. … Even if he turns it over to an independent trustee, there’s no perfect way to do this.”

Giuliani said Trump’s wealth may be the biggest deterrent to any conflicts of interest.

“This man didn’t want to run for president to try to get rich, he’s rich already,” Giuliani said.

On Sunday, Giuliani also touched on Trump’s immigration plan. In December, after the San Bernardino, California, terrorist attacks, Trump called for “a total and complete shutdown of Muslims entering the United States until our country’s representatives can figure out what is going on.”

But Giuliani said Trump’s stance had softened during the campaign.

For most countries, Giuliani said, “it wouldn’t be a ban, it would be extreme vetting.”

Giuliani said Muslims would be allowed into the United States if their home countries let immigration officials thoroughly examine the migrants.

The former New York mayor told Tapper that there are six countries – Pakistan, Egypt, Syria, Iraq, Afghanistan and Yemen – where “we have to be very careful.”

Giuliani said that with Pakistan and Egypt “we could probably do some pretty good vetting. Yemen is a lot more volatile.”

Syrian refugees would face the toughest hurdles, Giuliani said, because they are difficult to vet and could be terrorist operatives.

“The problem with the Syrian refugees is not just that you can’t vet them. … The problem is also that (ISIS leader Abu Bakr al-Baghdadi) has said that he’s going to put terrorist operatives among the refugees,” Giuliani said. “We would be foolish to allow these people to come into the United States. We are being warned that he is going to send people here to attack us.”

Giuliani is the vice-chair of Trump’s transition team. His name has been floated as a possible candidate for attorney general. He said an independent counsel should be appointed if the president-elect decides to prosecute Hillary Clinton – a promise Trump had made during the campaign.