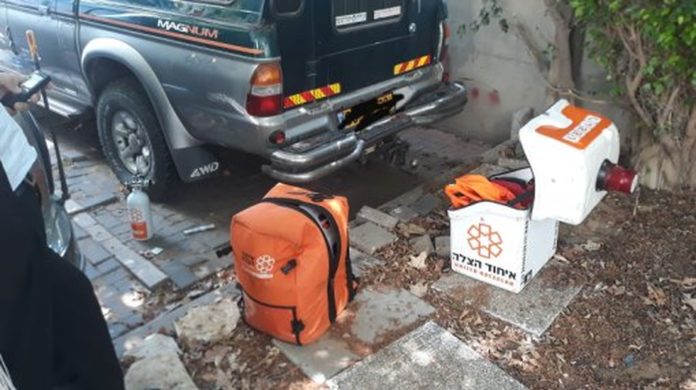 The new wave of theft and vandalism comes after last month’s theft of a bicycle wheel from one of the e-bikes in the city.

Reich who has been a volunteer responder for many years and has been riding the e-bike for the past two years on all of the emergency calls that he responds to was saddened by this new theft. “I use this electric bicycle to save lives. No people will need to wait longer for an emergency responder to arrive and that may cost lives. It is terrible that someone would want to do this.”

Reich is one of 100 United Hatzalah volunteer first responders who serve in the city and the surrounding area. The goal of the volunteers is to arrive at the scene of a medical emergency as fast as possible and provide emergency medical care until an ambulance can arrive. As many areas of the city have significant traffic problems, the e-bikes have been found to arrive much faster than an ambulance, and even faster than volunteers in cars on many occasions.

Reich was shocked to walk downstairs to the street outside his house on Sunday morning and see that his e-bike was stolen from the storage shed that he keeps it locked up in. The medical equipment that was inside the large box on the back of the bicycle, Reich found a few streets away from his house scattered across the ground.

“I came downstairs in the morning to take my bicycle out of the shed and was surprised and dismayed to see that the bicycle was gone. I was very saddened to see this. I reported the incident to the police and I sincerely hope that the electric bicycle will be found and quickly so that I can get back out on the street and continue saving lives and helping people,” said Reich.