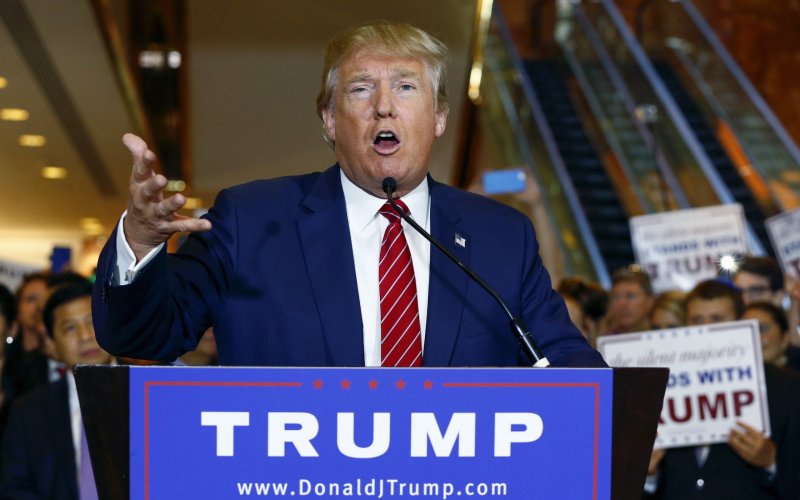 Foreign trips are not unusual for presumptive presidential nominees. In 2008, Barack Obama went to Israel and Afghanistan before heading to Europe to receive rock-star-like adulation. In 2012, Mitt Romney went to Israel and London. So if Donald Trump had decided to go abroad to demonstrate his foreign policy chops, it might have been cited as evidence of a more professional and serious approach to the election. But that’s not what brought Trump to Scotland on Friday.

Trump was taking care of business, but not the business of running for president. He was promoting his golf courses.

We have become used to the unusual from Trump, but this was still an extraordinary decision. Trump’s campaign is still in a state of chaos, with Hillary Clinton killing him in fundraising and the GOP looking largely unprepared and outgunned in an election where the Democrats already start out with huge advantages. Yet Trump was taking valuable time out not to plan or to fundraise or to work on uniting a deeply divided party. He was seeking to prop up his private business interests.

I suppose that shouldn’t come as a surprise. He is the same man who directed about one-sixth of all the money that he spent on his campaign in May and $6 million since he started running to Trump-owned businesses. But even if no one expects Trump to act in a seemly manner, there is still something utterly bizarre about a candidate prioritizing personal moneymaking in the midst of a presidential campaign. If he was looking to do something to add weight to the claims of those who believe his candidacy is one big scam, he could not have done better than to have dragged the political press to his financially failing Scottish golf courses.

Of course, in one sense Trump’s timing couldn’t have been better, since he arrived in Scotland the day after Britain voted to leave the European Union. As our Noah Rothman noted on Friday, the notion that there is some sort of analogy between the English throwing off the yoke of Brussels and Trump’s protectionist and isolationist agenda is bogus. But his presence there launched a thousand commentaries about anti-establishment revolts and the notion of a revived sense of blood-and-soil politics triumphing over globalism.

What Trump said in Scotland again betrayed his utter ignorance of the world (his claim that everyone in Scotland was celebrating when in fact the Scottish had opposed Brexit) and his crass instincts that always revolve around the amount of profit he can make out of any situation (his statement that it would be to his benefit if the pound sterling crashed and that he would also find a way to make money off of these circumstances if it held steady).

He also added one more flip-flop to the already impressive list of examples of his “flexibility.” After months of standing by his determination to ban Muslim travel to the United States, he said that he would let in Scottish Muslims and only prohibit those from “terror countries.” If so, that’s a saner approach to national security. Since that may change tomorrow, too, it’s useless holding on to it as an indication that he is either wising up or actually has firm beliefs about anything other than his own self-aggrandizement. In that sense, his press spokesperson Hope Hicks’ claim that “nothing has changed” is true if by that she means that Trump still hasn’t a principled bone in his body.

We know none of this will bother his core fan base that won him the GOP nomination. But if his goal is to be elected president, he’s going to have to expand upon that by winning over mainstream Republicans and independents that are still disgusted by his antics. But the Scottish junket was more proof that he isn’t serious about actually winning the election.

If Politico’s survey of the members of the Republicans’ all-important rules committee is to be believed, there doesn’t appear to be any chance that they will revolt against Trump (and, it must be admitted, the voters) and allow delegates to vote their consciences at the convention. But if those delegates were paying attention to the latest news about the Trump circus, they got more proof that Trump is still prioritizing his personal brand and businesses and failing to use the most scarce resource until November—time—to build a campaign that can compete with the Clinton machine. That is an act of colossal irresponsibility and a demonstration that he views the GOP nomination as merely an asset to leverage his personal interests. It serves to justify any effort on their part to stop him.

If the Trump train isn’t stopped by some extraordinary coup de main in Cleveland, several months from now Republicans will have to ask why they let a disaster unfold rather than trying to stop it. The honest among them will have to admit they were just pawns in a grand con that led the cause of conservatism and the GOP into an electoral disaster that might have been averted. The rest can go golfing in Scotland while Hillary Clinton thanks the political gods for a venal opponent like Trump.