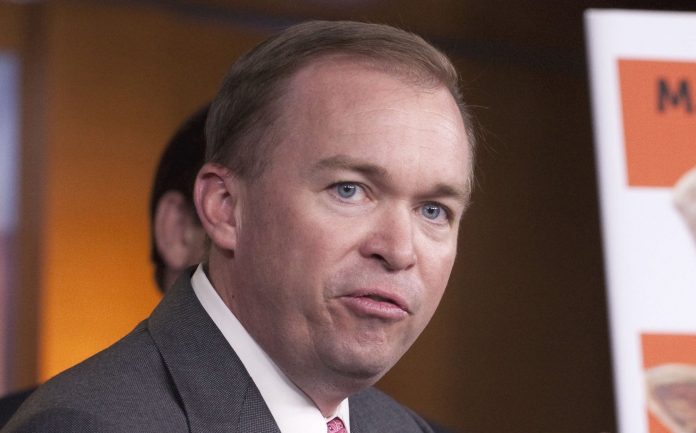 >>Follow Matzav On Whatsapp!<<
House budget director Mick Mulvaney said Sunday that President Donald Trump might refuse to sign a government spending bill that does not include money for a wall on the U.S.-Mexico border, leaving open the possibility of a federal government shutdown toward the end of the week.

“Will he sign a government funding bill that does not include funding for the border wall?” Chris Wallace, host of “Fox News Sunday,” asked Mulvaney during a televised interview.

“Yeah, and I think you saw his answer just in your little lead-in, which is: We don’t know yet,” Mulvaney responded. He was referring to comments Trump made to the Associated Press.

In an interview on NBC’s “Meet the Press,” White House Chief of Staff Reince Priebus appeared to take a slightly less rigid approach to getting money for a border wall, repeatedly talking more generally about the need for “border security.” Still, he mentioned the wall in the context of the president’s goals.

“I think that as long as the president’s priorities are adequately reflected … and there’s enough as far as flexibility for the border wall and border security, I think we’ll be OK with that,” he said.

The remarks came ahead of a looming deadline to keep the government funded. Current spending will expire Friday, leaving lawmakers and the White House scrambling to pass a stopgap bill.

Democrats say they vigorously oppose any money for a border wall in a new spending bill. The standoff threatens to create an 11th-hour, politically charged showdown.

“I don’t think anybody is trying to get to a shutdown,” Mulvaney said. “A shutdown is not a desired end. It’s not a tool. It’s not something we want to have. We want our priorities funded. And one of the biggest priorities during the campaign was border security – keeping Americans safe. And part of that was a border wall.”

Trump campaigned heavily on the promise of building a wall, which he said would curb illegal immigration and the flow of drugs into the United States. But he also repeatedly said that Mexico would pay for the wall. Mexico’s president has said his country will not do that.

Other administration officials also have advocated for funding the wall.

“I think it goes without saying that the president has been pretty straightforward about his desire and the need for a border wall,” Homeland Security Secretary John F. Kelly said in an interview with CNN’s “State of the Union” that aired Sunday. “So I would suspect, he’ll do the right thing for sure, but I would suspect he will be insistent on the funding.”

Mulvaney has said that the administration is willing to negotiate with Democrats – funding insurance subsidies under the Affordable Care Act (ACA) in exchange for support for wall funding.

But Democratic leaders say they are not open to that.

“The White House gambit to hold hostage health care for millions of Americans, in order to force American taxpayers to foot the bill for a wall that the President said would be paid for by Mexico is a complete non-starter,” Matt House, a spokesman for Senate Minority Leader Charles E. Schumer, D-N.Y., said in a statement Friday.

Republicans hold a 52-to-48 advantage over the Democratic caucus in the Senate. But Senate rules protecting the minority give Democrats some leverage. Senate Republicans must get 60 votes to pass legislation, meaning it is impossible to do so without some Democratic support.

The spending showdown comes as Congress prepares to return from a two-week recess with a busy to-do list. Trump and some other Republicans have been pressing to revive work on health-care legislation, which stalled last month because Republicans could not agree on a strategy for repealing and replacing the ACA.

Meanwhile, the Trump administration plans to release a very general sketch of its tax reform plan this week, Mulvaney said.

“I think what are you going to see Wednesday is some specific governing principles, some guidance,” he said, explaining that the White House will not release specific legislative text. “Also some indications of what the rates are going to be.”

Asked whether the plan will be revenue-neutral, Mulvaney replied, “I don’t think we’ve decided that part yet.”