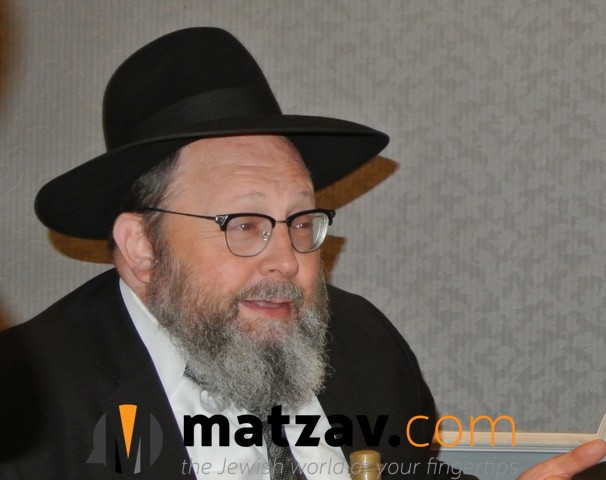 Humor me (after all, this is a Purim column). All male readers please sing the following words with their “trup.”

Not bad, but now I want you to do again loudly. C’mon, belt it out!

Much better. But I know you can do better yet.

Put your foot down! You are the boss! Your house is YOUR castle! Let them know for once all that YOU are in charge. [Picture the bombastic, ‘’To the Moon, Alice!” fellow, and you’ll get it just right.] Here goes…let it BOOM!

I know its comical, but that was the great advice that Haman (Memuchan ) offered Achashveirosh after he was defied by his impudent wife Vashti. So now it became a royal decree. MEN RULE! So there! Problem fixed for eternity.

[By the way, I can’t imagine this worked. Picture this scene in Shushan. The husband comes home from a long day at work. His wife tells him to take out the garbage. He responds, “Excuse me? Have you forgotten? Lehiyios kol ish..! It’s against the law! I’ll do what I want.” She retorts, “Oh yeah? Prosecute me! Now take out the garbage!”]

Let’s continue with the story. Haman – the HE MAN behind this decree – is very hurt that Mordecai refuses to kowtow to him. His ego is bruised so what does this alpha male do? he goes running home to seek solace from his wife, who instructs him to make a tall tree…and He dutifully listens.

Let’s return to Achashveirosh. He makes a contest to find a replacement wife –a nice subservient one, who won’t give him a hard time – and what happens? He chooses one who refuses to even tell her where she is from! But even more, his new queen manipulates him and gets him to do exactly what she wants. Some “soreir beveiso!”

All jokes aside, there is a very profound lesson here.

Achachveirosh, we are told, wished Zeresh to appear unclothed at the party. The Torah introduces us to clothing right after the sin of Adam Harishon. Adam had everything he wanted, but to be “k’Elokim” – as the serpent told him – he would have to eat from the Eitz hada’as, by which he would know good from bad.

What, in fact, determines actual “Good” and “Bad? If Hashem wants it, it is Good, and if He does not, it is Bad. By virtue of Hashem’s decision, objective Good and Bad is decided.  Man cannot determine that. But that is exactly what Adam wanted – to be the final arbiter of good and bad. Like Elokim. But of course it did not work; he gains the subjective sense of good and bad but that does not reflect the reality. It in fact corrupts his perception. He can no longer instinctively distinguish between that which is actually “good and bad” and that which appears to be good and bad. It may seem good and attractive but in reality, may be bad.

He was now suddenly humiliated by his state of being unclothed. One who feels like a fraud, who is “living a lie” is embarrassed, to the degree that his discomfort is even measureable by a lie detector. And what is a lie? When the presentation of something is inconsistent with the reality.

Adam and Chavah were the handiwork (“yetzir kapav”) of Hashem. As His handiwork they were unfathomably beautiful. But as a result of eating from the eitz hadaas, a yawning chasm opened between their external beauty and the ugliness inside. They were living a lie. And this was most acutely experienced in their capacity to procreate. With this facility they were capable of being so G-dly as to create another human, yet the corruption was so acute that they were now powerfully attracted to things that may have nothing to with that good. The gap between objective good and subjective good was most acutely felt in this capacity. So they donned clothing to hide their embarrassment.

Achashveirush, by ordering his wife to appear unclothed was denying that embarrassment. “I can determine what is good and bad, and I don’t care if the world, or social mores clamor that appearing unclothed is bad. If I want it, then its good. “lehiyos kol ish soreir b’’veiso.” Subjective good is now good.

Comes along Esther, the ultimate tzanua, (“ein Esther magedes…”), who realizes that external beauty can be a smokescreen and corrupter of objective good, and she uses that beauty to re-establish what is actual good. She tell Achashaveirosh, “Im tovah ani b’einav.” If you are attracted to me, then let me set you straight as to what is actual good and actual bad because appearances can be deceiving. V’nahapuch Hu. The Jews and Mordecai are good and Haman and the decree is bad.

If Chavah was the vehicle to draw Man away from the realization of objective Good and Bad, and she, with her physical beauty in fact embodies that confusion, then Esther is the tikkun – she uses that beauty to re-orient her husband and restore objective good and bad.

We drink “ad delo yada.” We cast away our subjective sense of good and bad, and we return to the yediah of Gan Eden.