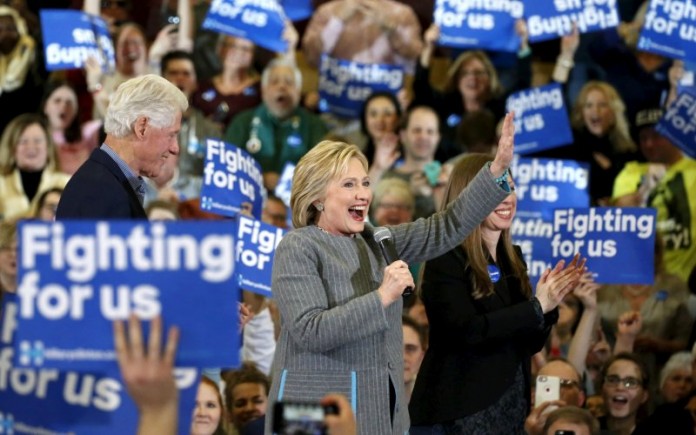 Hillary Clinton could be in for some political peril.

Sure, by winning 11 of the 17 contests since her New Hampshire drubbing, and running away with the delegate count, she’s not far from sewing up the Democratic presidential nomination. It’s the Republicans, not the Democrats, who face bitter divides that endanger the party’s future.

“Her history is that whenever she gets ahead and looks in good shape, she reverts to her worst form,” says Peter D. Hart, a leading Democratic pollster, citing 2007 and this cycle after her stellar first debate performance.

The Democrats’ confidence is based on the folly of Republicans’ nominating Donald Trump. But a lot can change in a few months and the Democrats’ own house has some needs. There is a demonstrable lack of enthusiasm about the likely Democratic nominee, underscored by the low turnouts in most contests. She is identified with the establishment by a restless electorate, and she is neither especially liked nor trusted by many swing voters, even some Democrats.

“She seems out of sync with the electorate,” says J. Ann Selzer, after looking at the surveys conducted by her firm, Selzer & Co., for Bloomberg, as well as primary exit polls. “For someone who started her campaign on a listening tour she doesn’t seem to be listening.”

Her likability issues go back a ways. In New Hampshire eight years ago, Barack Obama cracked, “You’re likable enough, Hillary.” The lack of trust stems mainly from the period after she stepped down as secretary of state in 2013.

Her shortcomings with voters have little to do with ideology or policies. “She laps the field on competence and skills to do the job,” Hart says. “What she needs to do is neutralize the personal distaste.”

The Democratic pollster suggests that “she needs an event most days that is personal, human, sometimes even light.” He said that the public needs to see more of the emotional side she displayed at a town hall in December, when she comforted a girl with asthma who had been bullied: “There won’t be a magical moment where people say she’s really a good egg but over time she can create a more favorable impression.”

David Plouffe, who managed Obama’s brilliant campaign against Clinton eight years ago, concurs, noting that it’s a myth that voters know all about her given that she has been around for a quarter century: “The key in this race is to define the race, her opponent and herself.”

Plouffe says this definition has to be “authentic’ and “tied to her sense of advocacy, which would reveal interesting sides of herself.” If she did this well, he adds, it could offer a comparative advantage with Trump — “this is a place he can’t go.”

The trustworthiness problem is deeper, more difficult. It stems from some issues that are unfair to her, such as the 2012 terrorist attack on a U.S. diplomatic installation in Benghazi, Libya, in which four Americans were killed — Capitol Hill Republicans tried and failed to use the incident to tarnish her. But some of the wounds are self-inflicted, such as her use of a private e-mail server as secretary of state and the huge speaking fees she received for private talks to big Wall Street companies.

Democratic strategists suggest that there’s no easy way to deal with it. Some talk about her doing a “Sister Souljah” moment, a reference to her husband’s criticism of a black rapper in 1992. This would require Hillary Clinton to take an unpopular, even risky position, displaying courage, a character point. That, however, probably is not in her political DNA.

A general election campaign against Trump would be filled fear and loathing. His Republican rivals, Jeb Bush, Marco Rubio and Ted Cruz can tell her how dirty the fight against the New York billionaire can get. Leading Democrats are confident that with her superior knowledge and intellectual agility, she can handle this. What worries them more is her recurring tendency, when on top, to show hubris.