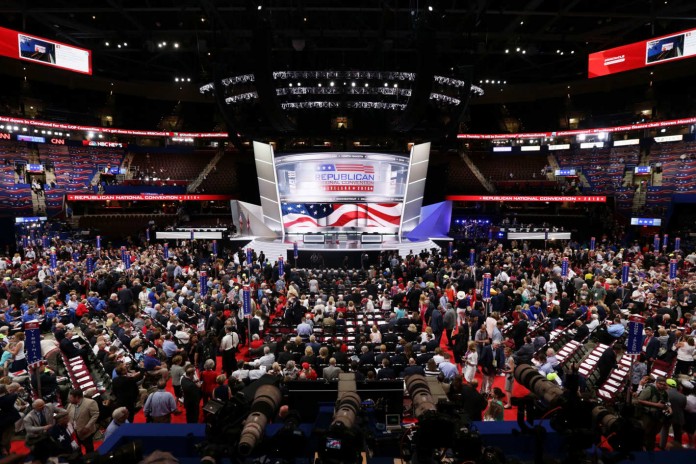 The second night of the Republican National Convention from Cleveland is in the books. I took some notes, tweeted some tweets and picked some of the bests and the worsts of the night.

My picks are below.

– Donald Trump Jr.: Trump’s eldest son took on a bigger challenge than the family members who spoke before him to the convention crowd: He didn’t just play it safe with a testament to his dad being a good guy and then beat a retreat. He delivered a broader address that not only cast his dad effectively as someone willing to get his hands dirty in pursuit of business success but also went after Hillary Clinton as an out-of-touch bureaucrat who is out of her depth. (I found Don Jr.’s retelling of his dad’s affection for and association with blue collar workers particularly effective.) This was a big speech with a high degree of difficulty. And, Don Jr. stuck the landing.

– Donald Trump: It’s easy to overlook the ho-hum results of the roll call vote early on Tuesday evening. But, you shouldn’t. A year ago the idea of Trump easily winning the 1,237 delegates he needed to formally become the party’s nominee was considered absurd. Three months ago, there were still lots of doubts. In the weeks leading up the convention, chatter flew among the Republican delegates that an insurrection was brewing. Nope! The Trump kids and their spouses — and the New York delegation — pushed him over the top, a very nice piece of political theater, well staged. Trump did the unthinkable on Tuesday night. And, whether you like him or hate him, he deserves a massive amount of credit for that.

– Mitch McConnell: The Senate Majority Leader has made no secret of his doubts and worries about Trump as the Republican nominee. But ever the savvy pol, McConnell found a way to thread the needle on Tuesday night — offering what I thought was the most convincing case for Trump by an establishment politician. McConnell focused on the ideas that unite he and Trump, and that separate he and Hillary Clinton. The Supreme Court. Obamacare. Defunding Planned Parenthood. And so on. It was a Reagan-esque attempt to point to the 80 percent of agreement rather than focus on the 20 percent of disagreement. (Worth noting: McConnell was greeted by a smattering of boos when he walked on stage, suggesting the gulf that still exists between the establishment and the Trump base.)

– Dana White: OK, it was weird that the president of the UFC was speaking at a party convention. Which he acknowledged at the start of his address. But, his energy and passion won the crowd over. I liked his story of Trump supporting UFC — although it’s a little odd to say you are for someone because he came to your events. Still, for a curveball, White was a good one — with plenty of snap and action.

– Brains: Never before has the human brain received so much attention in a convention speech. Ben Carson is the best.

– Paul Ryan: For some very smart people, the Speaker delivered a meaty, substantive address about the Republican party he wants to lead.

This the essence of the Presidential acceptance speech Paul Ryan would have given, had he been nominated this week.

For me, the speech felt flat — filled with attempts at reaching rhetorical heights that the Wisconsin Republican never came all that close to. It may have been the fact that Ryan was committed to delivering a speech that touched people far outside the convention hall filled with anti-establishment, Trump supporters. Ryan might have been playing chess while I watched checkers. But, for me for you, dawg, it didn’t work.

– Ben Carson: The convention crowd responded warmly to Carson. But, the brain surgeon quickly went off script — and not in a good way. He dropped a “Lucifer” reference! Then he did it again! There was a Thomas Jefferson name drop. Saul Alinsky came up! Time and again, Carson seemed to start a sentence and then, halfway through, head in an entirely different direction. The result was, too often, a word salad.

– President Barack Obama’s call for reeling in nasty political rhetoric: Remember when the president, in the wake of targeted shooting of police officers in Baton Rouge, Louisiana, and Dallas, implored both parties to take it down a notch at the party conventions? Yeah, not so much. For the second straight night, chants of “Lock her up!” rang through the convention hall. (The “her” in question is, in case you have lived on another planet for the last year, Hillary Clinton.)

And we’re only in night two! It’s hard to see how the speakers of the next two nights do anything to turn down the heat on Clinton.

– Shelley Moore Capito: The West Virginia Senator is a talented politician. But, she was an odd fit in the prime-time lineup — sandwiched between Donald Trump Jr. and Ben Carson, two stalwarts of the Trump movement. Capito is, um, not that; she was able to win in West Virginia by touting her moderate credentials and her ability to work across the aisle. The speech she gave was too long and felt sort of forced; “let’s turn the tide,” felt blah to the crowd. Also, how many gratuitous West Virginia references did she work in there!