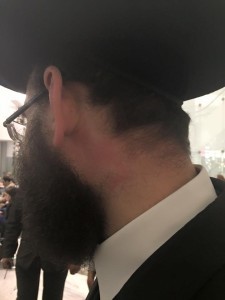 A Chassidishe man who was assaulted in the lobby of a New York City office building on Monday said security guards and witnesses in the vicinity did nothing to stop the attack.

“He punched me in the neck and there was security [there] and nobody interfered. They were just watching,” said the victim, who asked to remain anonymous. “I got bruised… and security didn’t even call 911, nothing. They’re just standing there and watching.”

Yoni Davidov, who witnessed the attack from a nearby coffee shop, told The Algemeiner, “It bothered me that no one attended to the man. People were just watching. [They] didn’t do anything. It was also shocking to me how everyone in the lobby and in the adjacent Starbucks was sitting quietly and no one even called the police or offered the man any help.”

Davidov posted a description of the incident on his Facebook page and provided more details in an interview with The Algemeiner. He said it began at around 5:30 p.m. in the lobby of 575 5th Avenue, which houses the corporate office of L’Oreal USA. The victim was sitting at a table and eating a sandwich, when an “Arab-looking” man demanded that he move. According to Davidov, the assailant didn’t want to share a table with a Jewish man.

Davidov said the victim told the man that he had arrived at the table first, and that he would finish eating quickly and give up his seat. Then, Davidov said, “This Arab-looking man punched him in the face multiple times, before fleeing the scene with his girlfriend.”

“I was shocked at the anger this animal had when he was assaulting this poor Hassidic guy,” said Davidov, who then approached the victim and told him he was going to call the police. The latter purportedly refused, on the grounds that he did not want to draw attention to the attack.

“I was trying to convince him, telling him that this type of hatred isn’t only directed at him, but is a direct threat to all Jews, since this was an outright hate crime,” Davidov explained. “He still refused, saying he doesn’t want to make a big deal. I was going to call the news stations so they can arrive and he almost started crying, saying that he didn’t want to blow this up, since it is improper in his community to go public on TV.”

In a subsequent interview with Shomrim, the victim said that police later arrived at the scene and spoke to a witness. They also examined security-camera footage of the attack.

The victim declined to speak with The Algemeiner further about the incident, sounding too shaken to recount his ordeal. L’Oreal USA did not immediately respond to a request for a comment.

In conclusion, Davidov asserted that the attack was “definitely a crime of hate! There was no other motive.”