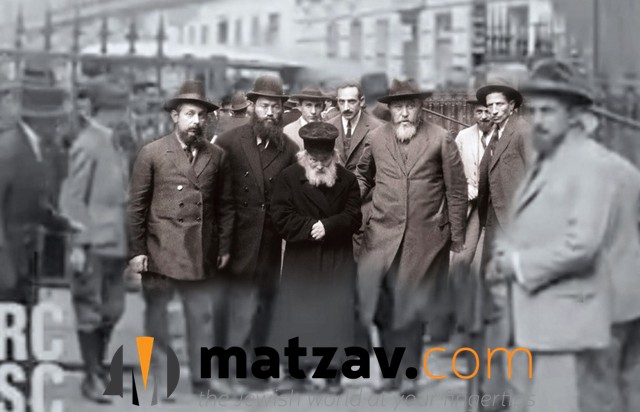 The yahrtzeit of the Chofetz Chaim is a special eis ratzon, a remarkably opportune time to invoke rachamei shomayim. This year, on Tuesday, 24 Elul/September 27, Klal Yisroel will utilize this eis ratzon by engaging in an International Yom Limud and Tefillah. Jews from all over the world will recite specific chapters of Tehillim and learn segments from the two seminal seforim written by the Chofetz Chaim, the Mishnah Berurah and the Sefer Chofetz Chaim.

The Yom Limud and Tefillah, being held under the auspices of Dirshu and its kiruv arm, Acheinu, is designed to reach out with a message of achdus to all Jews from across the spectrum and at all levels of observance, promoting Torah learning and tefillah. There is so much strife in the world, so much polarization and heated rhetoric. Combining sur meirah with aseh tov the Yom Limud and Tefillah has been designated as a day when all Jews are urged to make a special effort to avoid discord, lashon hara as well as any form of gossip and learn the seforim of the Chofetz Chaim.

Indeed, Yidden the world over owe a profound sense of hakaras hatov to the Chofetz Chaim for bestowing two gifts, the Mishnah Berurah and the Sefer Chofetz Chaim, upon us. Last year, Hagaon HaRav Shlomo Kanievsky, shlita, Rosh Yeshivas Kiryas Melech and a son of HaGaon HaRav Chaim Kanievsky, shlita, addressed this issue in the aftermath of the visit to Radin, by a large group of Gedolei Yisroel. From Radin the delegation went to the Volozhiner yeshiva. In front of the Volozhiner yeshiva, Rav Kanievsky said, “The feeling that we must have as we approach the holy kever of Rav Chaim Volozhiner is an overwhelming one of hakaras hatov. The greatest way to express that hakaras hatov is to continue his legacy by perpetuating the derech of the yeshivos begun with Volozhin, educating our bachurim in that derech and supporting the yeshivos hakedoshos.” We can extrapolate from Rav Kanievsky’s message that the optimum expression of our hakoras hatov to the Chofetz Chaim for gifting Klal Yisrael with his seforim – such integral parts of our lives – would be to follow in his ways, learn his Mishnah Berurah and become familiar with the laws of lashon hara and permitted speech and be constantly cognizant of what comes out of our mouths. This is truly the essence of the Yom Limud and Tefillah, a day to bring the Chofetz Chaim’s Torah, tefillah and message of Ahavas Yisroel and achdus to us all.

Visits to Radin, Mir and Kovno

The distinguished delegation will also journey to the town of Mir where they will daven at the kevarim of the great Mirer Mashgiach, HaGaon HaRav Yeruchem Levovitz, zt”l, and the Rav of Mir, HaGaon HaRav Tzvi Hirsch Kamai, zt”l. Tefillos will also be recited at the kever achim at the Ninth Fort in Kovno, where HaGaon HaRav Elchonon Wasserman, hy”d, was murdered al kiddush Hashem.

Without a doubt the climax of the journey will be the tefillos and words of hisorerus at the kever of the Chofetz Chaim to be delivered by Rav Aryeh Zilberstein, Rav Avraham Salim and the ne’ilah shmuess by Rav Mishkovsky.

Generating a Tremendous Atmosphere of Goodwill and Achdus in Klal Yisrael

This year’s Yom Limud and Tefillah is the second such event. Last year’s event attracted some 500,000 Jews worldwide. This year, organizers hope to reach well past that goal, tapping into the innate feeling of every Jewish neshamah, that extraordinary times such as the ones in which we live, with threats from within and without call, for a concentrated effort in tefillah and achdus to invoke rachamei shomayim in the zechus of the heiligeh Chofetz Chaim who was so moser nefesh to promote these ideals among Klal Yisroel.

Hundreds of yeshivos, chadorim, schools, shuls and even individual businesses from across America, Eretz Yisrael, Europe, South America, South Africa and Australia, have signed up to participate in the yom tefillah on Tuesday 24 Elul/September 27. They will recite two chapters of Tehillim and learn the daily limud of Daf HaYomi B’Halacha, as well as select halachos from the sefer Chofetz Chaim.

The anticipated Yom Limud and Tefillah has already begun generating a tremendous atmosphere of goodwill and achdus amongst Klal Yisrael. A peek into just a few of the institutions in America that have signed up to participate and take advantage of the auspicious time to daven with so many likeminded Yidden attests to that achdus.

“The Nazis are Gone, the Communists are Gone, but the Chofetz Chaim and His Mishnah Berurah are Eternal!”

We are living in truly perilous times. Even in the United States there is a certain sense of instability, as we are in the throes of a tumultuous and nasty presidential election. There is civil unrest as well as the threat of terrorism at home and abroad that can have severe ramifications. At this uncertain juncture we are in dire need of tremendous rachamei shomayim. Now is the time to join together with untold numbers of Jews all over the world to daven for Klal Yisrael. The yahrtzeit of the Chofetz Chaim is a remarkably auspicious time to invoke Divine mercy.

Now is the time to Join with Klal Yisrael in the Yom Limud and Tefillah this Tuesday, 24 Elul/September 27 and tap into this unique eis ratzon!