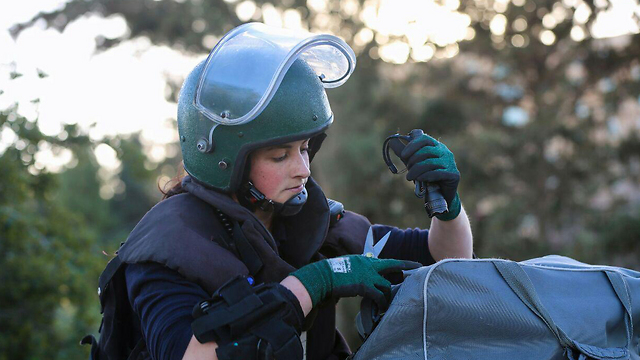 The wave of terrorism in Yerushalayim has the district’s police force working round the clock, going from one crime scene to another, sometimes without a moment’s rest while on duty. The police’s bomb squad is working particularly hard: disarming bombs, examining suspicious vehicles and objects and checking for explosives at scenes of terrorist attacks.

Master Sergeant Alex Pekerman, 27, stands out among them as she is the first female bomb disposal specialist in the Jerusalem Police. She joined the team just six months ago, just as hostilities erupted.

“My father is an explosive disposal officer and I grew up in this system,” says Master Sergeant Pekerman. “I saw him doing the job, I knew the people, and somehow it always attracted me. After I finished my studies, I was looking for a job and somehow I got pulled into the field of explosive disposal. Slowly I got sucked in and here I am.”

Pekerman’s average day ranges from reports on suspicious objects and vehicles to terrorist attack scenes, which she has unfortunately already visited quite a few times over the past six months. The first event that she worked as an explosive disposal specialist was the Ha’Neviim Street terrorist attack, in which a policeman was stabbed while sitting in a car.

Read a full report at YNET.