R’ Shalom Mordechai Rubashkin, former manager of Postville’s kosher meat plant, goes on trial today at 9 a.m. A group of Yidden  from New York has travelled to Sioux City, South Dakota, in time for the trial. The photo here shows the group settling down for supper last night. The group arose early this morning, davened Shacharis not long ago at 7 a.m., and will be heading to the courthouse shortly.

The group chartered a bus in order to accommodate those who want to be mechazeik a Yid who for countless years gave selflessly to the greater frum community and whose chesed activities were always carried out without fanfare and with few people being aware of them. R’ Shalom Mordechai, the Matzav.com reporter on site in South Dakota reports, is “calm and is displaying a tremendous amount of bitachon.” 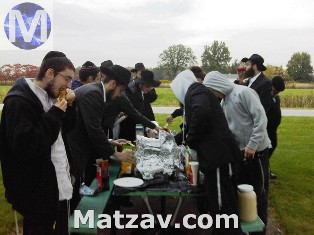 “It is truly amazing,” Getzel Rubashkin, a son of R’ Shalom Mordechai, told Matzav.com early this morning. “He continues to instill chizuk in all of us, when logic would suggest that the opposite should be true. R’ Shalom Mordechai is a true boteach baHashem.”

R’ Shalom Mordechai’s  legal team will work to prove his innocence in the face of the charges which have been leveled against him, and this presents an opportunity to many Yidden to help him in a physical way and demonstrate support to the world, which will be carefully watching this trial.

Sleeping accommodations tonight for the group will be at a motel.

The bus will be leaving between 5 and 6 p.m. tomorrow in order to arrive in New York the same the time on Thursday.

R’ Shalom will face 91 charges in the trial which could effectively send him to prison for the rest of his life – a shocking reality in a case of the Federal government railroading a man in unparalleled and unprecedented fashion. The former executive at Agriprocessors Inc. will step into the Sioux Falls federal courtroom in less than an hour with his wife, Leah, and their children for a legal struggle that could last four to six weeks.

Rubashkin has prepared for trial “intensely, but also with the peace of mind of a man who knows he will be, G-d willing, fully exonerated,” Getzel said.

The trial comes more than a year after federal agents raided Agriprocessors and arrested 389 illegal immigrants.

Some of the charges against Rubashkin are unusual for a federal criminal case, legal scholars said. Prosecutors allege that Rubashkin violated a 2002 order by the U.S. secretary of agriculture to pay cattle providers within 24 hours of a sale. The charge stems from a 1921 law, the U.S. Packers and Stockyards Act. The law requires “prompt payment” to protect livestock producers. Two scholars who studied the law said they had never seen it invoked in a criminal case.

“This is the first time in my life that I’ve heard of that,” said Chris Kelley, a University of Arkansas law school professor.

Defense lawyer Guy Cook of Des Moines has said his client denies all of the charges. Cook said he could not comment because of ethics rules, but he has suggested in court papers that others were responsible for routing the money.

The fraud and immigration trials were supposed to take place in Cedar Rapids. But U.S. District Judge Linda Reade moved the trial to Sioux Falls because of pretrial publicity that she said could influence potential jurors.

The high-profile case has turned contentious at times. Defense lawyers in September filed a motion to dismiss the charges, on grounds that prosecutors abused their power and used grand jury hearings to “lock in” statements by their witnesses.

Reade also warned lawyers not to speak with the media during a recent hearing, because of defense statements that prosecutors said amounted to trying Rubashkin in the media.

Prosecutors also have revised their charges against Rubashkin seven times, which defense lawyers and legal experts say is unprecedented.

“Anyone who ‘knows’ my father from media reports does not know him at all,” Getzel Rubashkin told the Des Moines Register. “The character portrayed was created out of whole cloth, as anyone who knows my father immediately recognizes. … My father is a kind man, dedicated to helping others, be it in the sphere of family, community (both Jewish and non-Jewish) or beyond.”