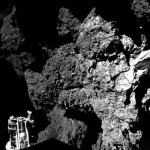 The first space probe to make a successful soft landing on a comet, the Philae lander on comet 67P, has sent its last batch of data back to Earth before losing power.

The probe, which is pressed against a cliff, is only exposed to 1.5 hours of sunlight during the comet’s 12-hour day, making it unlikely that its battery will get enough time to recharge. But before it dropped into standby mode, it delivered all the data it had gathered.

“This machine performed magnificently under tough conditions and we can be fully proud of the incredible scientific success Philae has delivered,” Stephan Ulamec, lander manager, said. A senior scientific adviser to the ESA told BBC Radio that Philae “could come back later as we move closer to the sun, and we get more light onto the solar panels up against the cliff we’re at here in the shadows.” Read more at BBC News.