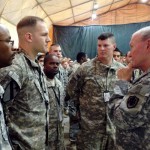 During a surprise visit to U.S. troops in Baghdad today, top military officer General Martin Dempsey said that the momentum in the battle with ISIS is “starting to turn,” but predicted a campaign that will last several years.

Dempsey, the current Chairman of the Joint Chiefs of Staff, was visiting Iraq for the first time since the U.S. responded to ISIS advances this summer. He told troops that the U.S. military has helped Iraqi and Kurdish forces “pull Iraq back from the precipice.”

Also today, Iraqi forces appeared to be getting close to retaking the country’s biggest oil refinery back from ISIS militants in the town of Baiji. Read more.