Valentina Colombo, Senior Fellow at the European Foundation for Democracy in Brussels, said the following in an interview:

A few days ago Yusuf Qaradawi issued a…call to the Arab and Muslim peoples. And the title of this call was “Save al-Aqsa.”

At the end of the statement Qaradawi quotes Hadith, a saying of Muhammad: “The time would not come until the Muslims will fight the Jews and kill them; until the Jews hide behind rocks and trees, which will cry: Oh, Muslim! There is a Jew hiding behind me, come and kill him!”

The meaning of this is that Qaradawi, who is the main theologian of the Muslim Brotherhood, is calling to kill Jews.

If a person like him calls to kill the Jews, we do not know what can happen next Friday in mosques or in the next days in the streets of Europe. 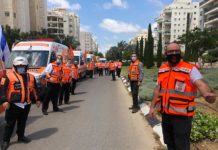