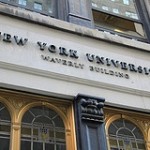 At the top of the public schools list was Rutgers University, in New Jersey, where the 6,400 Jewish students made up 19% of the undergraduate population.

A full 29% of the undergrad population at CUNY, Brooklyn College, was Jewish.

Among private schools, Boston University was the next most popular choice, after NYU, with 3,500 Jewish students. Perhaps unsurprisingly, 100% of Yeshiva University’s 3,076 undergraduate population was Jewish, though only 20% of its graduate student population belonged to the Jewish faith.