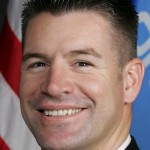 Oklahoma State Representative John Bennett used strong language to describe Muslims in America on Monday. During a town-hall meeting, the Republican said Muslims are a “cancer that must be cut out of the American society.”

He continued: “Islam is not a religion. Islam is a socio-political system that uses a deity to advance its agenda of global conquest,” adding that “more than 90 percent of the Quran is about violence and the violence necessary to overtake non-believers.”

Bennett has previously come under fire for comments he has made warning people to be afraid of American Muslims. Read more at Sequoya County Times.