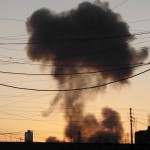 The British air force killed two UK nationals who had joined Islamic State in a drone strike in Syria, Prime Minister David Cameron said Monday. Cameron said the Royal Air Force killed Reyaad Khan on Aug. 21 as he was traveling in a vehicle near the city of Raqqa. Two Islamic State associates also were killed in the attack, including another British national, Ruhul Amin.

“I want to be clear that this…was a targeted strike to deal with a clear, credible and specific terrorist threat to our country at home,” Cameron told Parliament. He said Khan was actively recruiting extremist sympathizers and seeking to orchestrate attacks against the West, including on high-profile public commemorations in Britain over the summer.

The drone strike was the only feasible means of effectively disrupting the attacks planned and directed by Khan, Cameron said. “There was nothing to suggest that Reyaad Khan would ever leave Syria or desist from his desire to murder us at home,” the prime minister said.