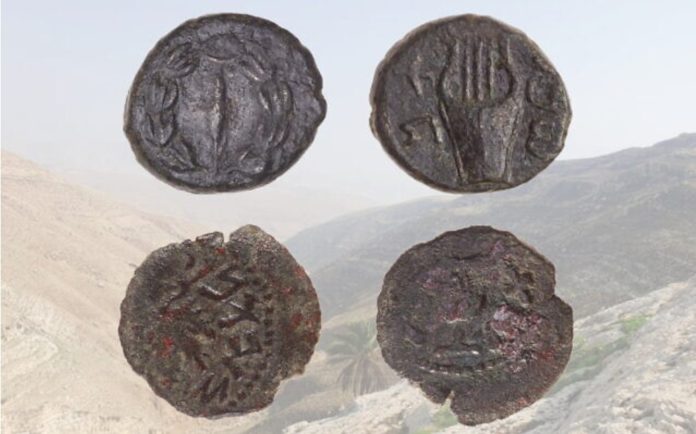 Two rare coins dating back to the Jewish revolts against the Romans were recently discovered by Israeli archaeologists in the Binyamin region of the West Bank.

The first coin was discovered on the ground at the Khirbat Jib’it archaeological site, just south of the West Bank town of Duma. It dates back to the Great Revolt, the first Jewish–Roman War, according to researchers from Bar-Ilan University.

The Khirbat Jib’it coin was minted around 67-68 CE, according to Dr. Dvir Raviv, who led the survey. On one side it bears a vine leaf and the Hebrew inscription Cherut Tziyon. The other side is decorated with an amphora and the inscription “Year Two.”

Just one kilometer north, a second coin was found in a cave on the Wadi Rashash cliffs, dating back to the Bar-Kochva Revolt, the final major war fought between Jews and Romans.

According to Raviv, the second coin was minted around 134-135 CE, and it bears a palm branch, possibly a lulavz and a wreath surrounded by the inscription Lecherut Yerushalayim (for the freedom of Yerushalayim).