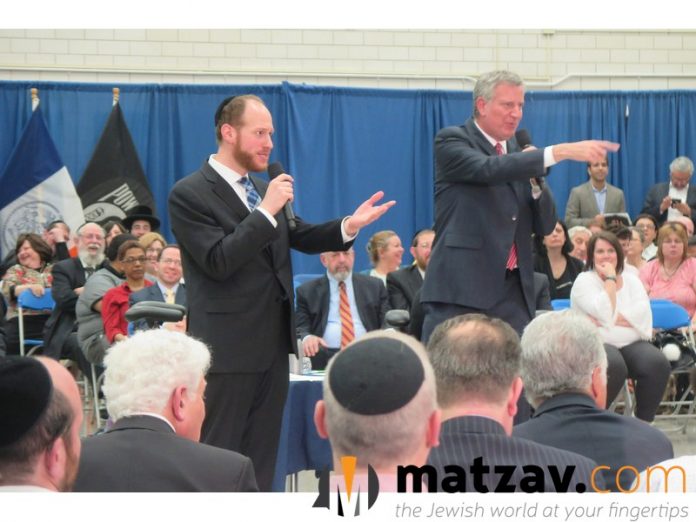 For the first time in modern history, a sitting mayor of New York City came to Boro Park and Flatbush to hear the concerns of the community at a town hall hosted by Councilman David Greenfield.

Mayor Bill de Blasio returned to his Brooklyn roots to take questions from community residents on a variety of pressing issues, ranging from the speed limit on Ocean Parkway to complaints about garbage pickup and reduced public pool hours. The Mayor was accompanied by a phalanx of his top aides, including an impressive array of commissioners.

“Literally, every major city agency had its commissioner or deputy commissioner here,” Greenfield said. “It was an incredible scene. The Mayor brought City Hall to Brooklyn.”

The New York Police Department was also well represented, with Southern Brooklyn Chief Steven Powers in attendance along with the commanding officers of the 61st, 62nd, 66th, and 70th Precincts.

Councilman Greenfield moderated the event, and Mayor de Blasio listened and responded to over forty questions in a forum lasting approximately three hours. Many of the commissioners and agency heads stayed until well past 11:00 p.m. to resolve community concerns.

“This was the most successful community political event in the history of Boro Park and Flatbush,” Greenfield said. “I give Mayor de Blasio enormous credit for coming here. He was engaged, focused and committed to getting results to everyone.”

By the time the Mayor entered the room, there was not a free seat in sight. All told, more than 600 people were seated in the cafeteria at Franklin Delano Roosevelt High School, with dozens of others standing in the back rows against the walls. 100 more residents watched the event from the overflow room next door.

“The fact that we were completely full shows how strongly residents of these communities want their voices heard,” Greenfield said.

Greenfield introduced de Blasio as someone he has worked with to achieve several key goals, including Greenfield’s landmark legislation providing security funding for all non-public schools in New York City.

“We are the first city in the world that says ‘Every child that goes to school deserves security,'” Greenfield explained. “It could not have happened without the Mayor, and I am incredibly thankful for that.”

After Greenfield’s remarks, de Blasio praised the Councilman’s hard work and devotion to the community.

“This is an incredibly hardworking guy. He is smart, and he is purposeful, and he is substantive. When he puts his mind to something, there is a very good chance it is going to happen,” de Blasio said. 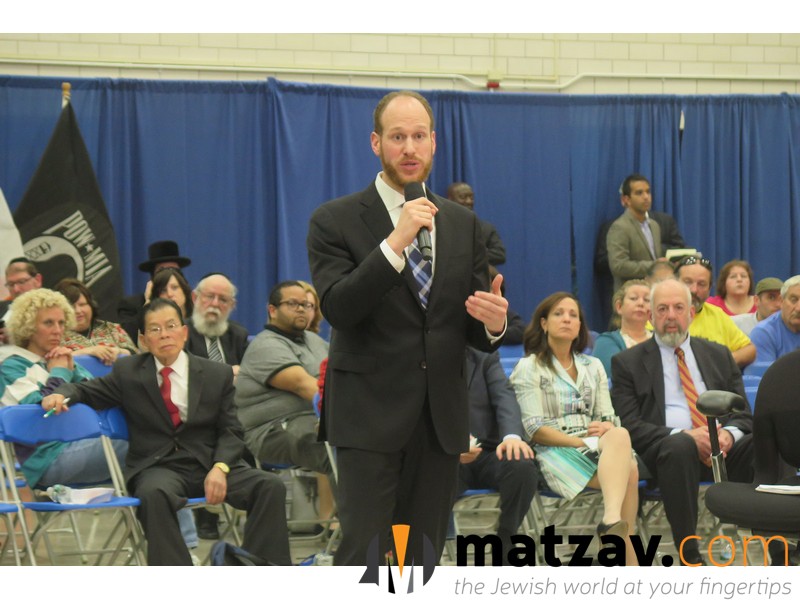 Transportation was a consistent topic throughout the night, with Department of Transportation Commissioner Polly Trottenberg and Brooklyn Deputy Keith Bray facing an array of questions regarding parking, speed limits, and bus patterns.

In his speech, the Mayor announced that he was expanding Greenfield’s parking meter program, in which parking meters on Friday are reprogrammed so that people can pre-pay before early winter Shabbos. Once the expansion goes into effect, over 1,300 meters in Boro Park and Flatbush will allow residents to purchase meter tickets up to four hours in advance on Friday afternoon. This, the Mayor said, will allow people in the community to properly prepare for Shabbos without the fear of a parking ticket.

The loudest applause of the night came when one community member asked why New York City reduced the speed limit on Ocean Parkway from 30 to 25 miles per hour.

Although de Blasio explained why the speed limit itself can’t be changed, Greenfield pointed out that some of the community’s concerns could be addressed without raising the speed limit.

“The problem is that there are speed cameras,” Greenfield said. “You don’t even realize that you’re going 36 miles per hour because everyone is going 36 hours per hour. That’s what’s frustrating.” 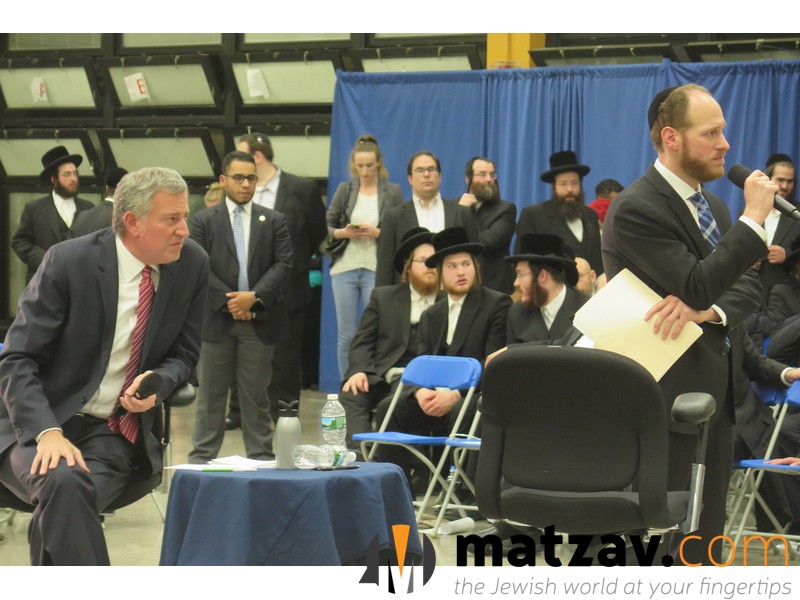 Jewish issues were also threaded throughout the evening, which was unsurprising for the large Jewish crowd, with representatives from multiple mosdos and Jewish organizations in attendance.

One leader asked why there were so few Orthodox Jews at the highest levels of the City’s business and government. De Blasio both saluted the hard work of Orthodox entrepreneurs and officials and discussed programs to swell their ranks.

Later, a man stood up to demand that the Mayor end the pre-Yom Kippur custom of Kaparos, in which participants slaughter a chicken that is donated to charity. The man claimed that participants violate New York City health codes.

Greenfield, speaking as both a representative for the community and a law professor, struck back by quoting the First Amendment of the United States Constitution, saying “Congress shall make no law respecting an establishment of religion, or prohibiting the free exercise thereof.”

Greenfield’s response was met with enthusiastic applause from the crowd.

“So many important issues were discussed during the town hall that the Mayor might have never known about before,” Greenfield said. “Everyone here saw that Mayor de Blasio is committed to resolving their issues and improving our neighborhoods. Overall, this town hall was an incredible success!”