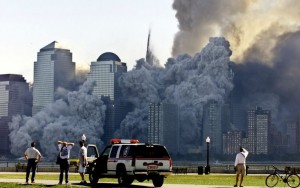 Donald Trump demanded an apology from people who noted there is zero evidence that “thousands of people” in New Jersey were cheering the destruction of the World Trade Center on Sept. 11, 2001,  Justin Miller reports for the Daily Beast.

Trump made that claim on ABC News’s This Week on Sunday. On Monday, Trump tweeted a Washington Post article from Sept. 18, 2001 that said, in part, “authorities detained and questioned a number of people who were allegedly seen celebrating the attacks and holding tailgate-style parties on rooftops while they watched the devastation on the other side of the river.” One of the reporters, Serge Kovaleski, told The Daily Beast on Monday his report does not vindicate Trump.

“We did a lot of shoe leather reporting in and around Jersey City and talked to a lot of residents and officials for the broader story. Much of that has, indeed, faded from memory. But I do not recall anyone saying there were thousands, or even hundreds, of people celebrating. That was not the case, as best as I can remember.”