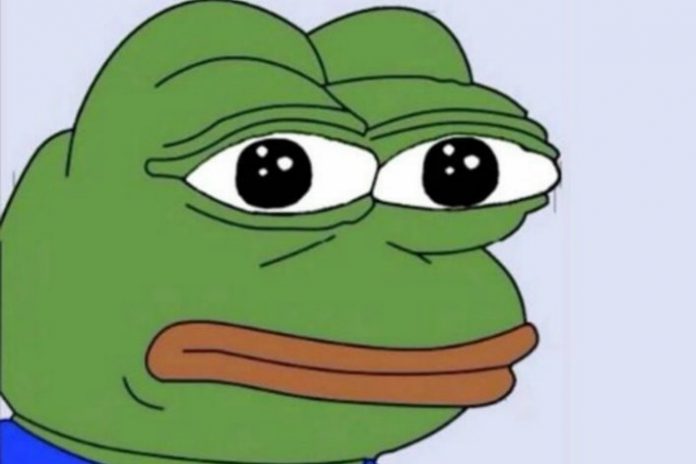 The Anti-Defamation League on Tuesday officially added the “Pepe the Frog” cartoon character to its database of “hate symbols.” In an official statement, the ADL said, “The Pepe the Frog character did not originally have racist or anti-Semitic connotations. Internet users appropriated the character and turned him into a meme, placing the frog in a variety of circumstances and saying many different things.” The organization continued: “[T]he use of racist and bigoted versions of Pepe memes seems to be increasing, not decreasing.” Attached to the ADL’s press release were several examples of anti-Semitic uses of the Pepe meme, including one in which the frog dons a Hitler mustache and says, “Kill Jews, man.”

The following is the ADL’s full statement:

Pepe the Frog is a cartoon character that has become a popular Internet meme (often referred to as the “sad frog meme” by people unfamiliar with the name of the character).  The character first appeared in 2005 in the on-line cartoon Boy’s Club, created by artist Matt Furie.  In that appearance, the character also first used its catchphrase, “feels good, man.”

The Pepe the Frog character did not originally have racist or anti-Semitic connotations.  Internet users appropriated the character and turned him into a meme, placing the frog in a variety of circumstances and saying many different things.  Many variations of the meme became rather esoteric, resulting in the phenomenon of so-called “rare Pepes.”

The majority of uses of Pepe the Frog have been, and continue to be, non-bigoted.  However, it was inevitable that, as the meme proliferated in on-line venues such as 4chan, 8chan, and Reddit, which have many users who delight in creating racist memes and imagery, a subset of Pepe memes would come into existence that centered on racist, anti-Semitic or other bigoted themes.

In recent years, with the growth of the “alt right” segment of the white supremacist movement, a segment that draws some of its support from some of the above-mentioned Internet sites, the number of “alt right” Pepe memes has grown, a tendency exacerbated by the controversial and contentious 2016 presidential election.  Though Pepe memes have many defenders, not least the character’s creator, Matt Furie, who has called the alt right appropriation of the meme merely a “phase,” the use of racist and bigoted versions of Pepe memes seems to be increasing, not decreasing.

However, because so many Pepe the Frog memes are not bigoted in nature, it is  important to examine use of the meme only in context.  The mere fact of posting a Pepe meme does not mean that someone is racist or white supremacist.  However, if the meme itself is racist or anti-Semitic in nature, or if it appears in a context containing bigoted or offensive language or symbols, then it may have been used for hateful purposes.