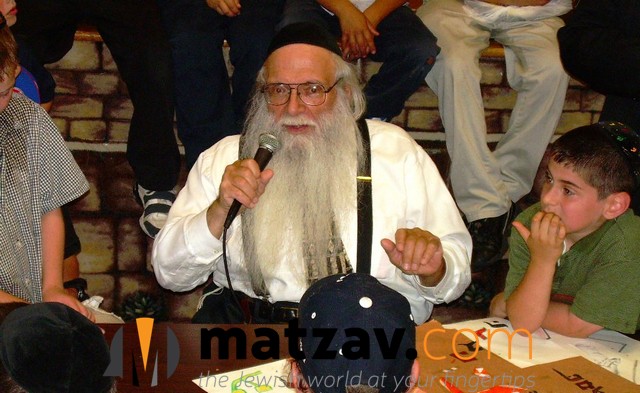 By Rabbi Lazer Avtzon for COLLive

Having grown up in Detroit, I flew there this week with my sister Dina Borenstein to comfort the family of veteran educator, Rabbi Shmuel Kaufman zt”l, the beloved teacher in Yeshiva Beth Yehudah in Detroit.

Sitting there, I was given additional details to the incredible Yechidus he had with the Lubavitcher Rebbe resulting in the bracha to him and his wife to have children. I also heard another amazing story that is equally mind-blowing.

This story was originally printed in the Kfar Chabad magazine a while back, but some details were not verified.

Reb Shmuel came to Detroit as a single bochur to teach at Yeshiva Bais Yehudah, a Jewish day school consisting of two campuses at Southfield and Oak Park, Michigan. It serves boys and girls from pre-kindergarten to grade 12.

Thursday nights and Shabbosim, Reb Shmuel would spend at the home of my parents Rabbi Meir and Cheyena Avtzon. He remained close after he got married to his wife Risha and their return to Detroit.

After several years of being married and not being blessed with children, my father suggested that they travel together to New York and see the Rebbe for a bracha.

Initially, he refused, but after visiting all the other Gedolim of the time and still no yeshua, Reb Shmuel finally relented and came with my father to 770 Eastern Parkway.

After detailing his situation and asking the Rebbe for a bracha, the Rebbe turned to him and asked whether he ever unintentionally hurt a girl’s feelings to the point she might have a ‘kpaida’ (grudge) against him.

Reb Shmuel answered, “No, to the best of my recollection.”

The Rebbe then asked again, “Is it possible you dated a girl and led her to believe you were interested in her and then broke up without asking Mechila (forgiveness)?”

Again, he said he does not recall.

My father, who was present at the Yechidus, intervened at that point. “If the Rebbe is asking you twice, you should think hard and remember, because there has to be something!”

After further thought, Reb Shmuel remembered being on a date and loaning the girl a sweater to warm her from the cold. He later decided it was not meant to be and merely informed the Shadchan that it was over.

The Rebbe replied, “You must ask Mechila with a full heart.”

The Rebbe replied, “If you really try, you will see how easy it is.”

The Rebbe then blessed him and said, “Once you ask Mechila and she truly forgives you, you will be blessed with children.”

“And what if she doesn’t want to forgive me”? he asked.

The Rebbe replied, tell her that if she forgives you with a full heart, she will soon find her bashert (her own match).

The Yechidus then turned to another subject with the Rebbe asking him what he does and learning that he is a teacher.

The Rebbe asked, “Do you tell stories of Tzadikim?” and he replied that he does not because he considers it Bitul Torah.

The Rebbe answered, “telling stories of Tzadikim is in itself Torah! Tell stories!”

After leaving Yechidus, he searched and searched and ultimately found the phone number of a brother of the girl. He called and spoke to the brother and asked if there was any way for him to get in touch with his sister.

“Why would you want to speak to her now after all these years and after breaking her heart?” he answered.

Unbeknownst to Reb Shmuel, the girl had felt strongly that by his loaning of the sweater during the date that he really liked her. She was so grief-stricken from being left cold-turkey that she bore a tremendous resentment towards him.

Her brother then said, “She’s actually here visiting me now but she doesn’t want to talk to you!”

Reb Shmuel begged and said, “I just came from Yechidus with the Lubavitcher Rebbe and was told that the reason my wife and I were still not blessed with children is because I hurt your sister and must ask Mechila. Trust me, I had no idea and am terribly sorry.”

A meeting was arranged, the girl initially did not agree to forgive him. When he told her that the Rebbe said that if she forgives him it will open the doors of blessing for her as well, she agreed and said I forgive you with a full heart.

Some 3 months later, my mother called Reb Shmuel at 6:00 AM and wakes him to share the great news that the girl he had dated was now engaged to be married.

One month later, his wife became pregnant with their eldest sonYona. Over the years, they were blessed with another 6 children.

But even more amazing than this story is the fact that Rabbi Kaufman is remembered as a devoted and beloved teacher and the one who inspired thousands, perhaps tens of thousands of students to live lives of Yiras Shamayim.

What was his secret ingredient? Stories.

Throughout his career in chinuch, Reb Shmuel told stories like you never heard. When he told a story, you felt you were there witnessing and a part of it. He brought to life the characters, the setting and the pure faith they exuded.

The Rebbe told him to tell stories and assured him that not only is it not Bitul Torah, but that it’s Torah itself. From that day onward, he never ceased to tell stories.