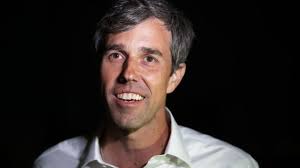 Former Rep. Beto O’Rourke, D-Texas, on Thursday took an aggressive new stance against former Vice President Joe Biden, arguing that a vote for his competitor in the 2020 Democratic presidential primaries would be a return to the past.

O’Rourke’s remarks, made in an interview on MSNBC’s “Morning Joe,” mark a departure from his previous hesitance to criticize fellow party hopefuls. Biden is currently leading in early polls for the party’s nomination.

Asked what he would tell voters in trying to persuade them to vote for him rather than Biden, O’Rourke replied that “you cannot go back to the end of the Obama administration and think that that’s good enough.”

The country “had real problems before Donald Trump became president,” O’Rourke said, pointing to the wealth disparity between black and white Americans, the persistent problem of gun violence and the Obama administration’s record on deportations, which he described as “destroying families and breaking up communities.”

“So, we cannot return to the past,” O’Rourke said. “We cannot simply be about defeating Donald Trump.”

Later in the interview, asked by co-host Willie Geist, “So is Joe Biden the return to the past?” O’Rourke replied, “He is.”

“And that cannot be who we are going forward,” he said. “We’ve got to be bigger; we’ve got to be bolder. We have to set a much higher mark and be relentless in pursuing that.”

O’Rourke had previously refrained from directly attacking his 2020 competitors, as well as Sen. Ted Cruz, R-Texas, who bested him in the 2018 Senate race.

Like other Democrats, O’Rourke earlier this month was critical of Biden over his support of the Hyde Amendment, which bans federal funding for abortion in most circumstances. When Biden reversed his stance, O’Rourke issued faint praise: “Well, he got to the right place, and … yeah, so that’s really all I can say on that,” O’Rourke said last week in an interview with The Washington Post.

By contrast, in Thursday’s “Morning Joe” interview, O’Rourke openly questioned whether Biden’s shift on the Hyde Amendment was genuine.

“Look, you’ve got to ask yourself where Joe Biden is on the issues that are most important to you,” O’Rourke said. “Did he support the war in Iraq that forever destabilized the Middle East? Does he really believe that women of lower income should be able to make their own decisions abut their own body and be able to afford health care in order to do that? He supported the Hyde Amendment.”

“He says China is not [a] threat, nothing to worry about,” O’Rourke said. “And now seems to be changing his message on that. So I’m not exactly sure what he believes or what he should apologize for. I only know that this country should be able to do far better.”