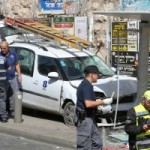 Israeli telecom giant Bezeq sent a statement to its staff on Tuesday, after it was revealed that the perpetrator of a deadly car-ramming and meat-cleaver attack in Yerushalayim that morning was a company employee.

“It has come to our attention that a Bezeq employee was responsible for the terrorist attack in Jerusalem this morning in Malchei Yisrael Square. As of now, we have yet to receive all the details, but what is clear is that this is a serious incident. The Bezeq company, for all of its employees, expresses revulsion at this despicable act,” the statement read, according to Israeli 0404 news.

The company was responding to an attack by an east Jerusalem man in the Geula neighborhood of Yerushalayim on Tuesday that left one person, Rav Yeshayahu Krishevsky zt”l, dead. The assailant plowed his car onto the sidewalk, ramming two pedestrians, before emerging from the vehicle with a cleaver in hand, to continue attacking his victims. He was shot before he could claim any more lives.

The attack was the latest in a string of more than 30 terrorist attacks against Israelis — mostly stabbings, but also rock-throwing, firebombings and car-rammings — across the country since the beginning of October.

Tuesday’s car-ramming attack happened at almost the same time as two Palestinians on a passenger bus armed with a knife and a gun claimed two more victims, bringing the Israeli death toll to seven. Additionally, some 27 Palestinians, including 11 attackers, have been killed since the spike in violence began around the Yomim Noraim.