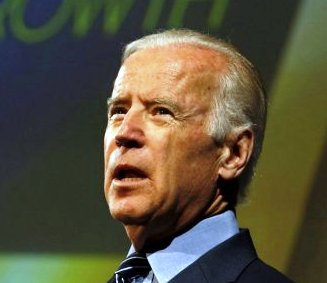 “Don’t listen to that other fellow. He knows not of what he speaks,” Biden said in a speech to Baltic leaders here. He paused for emphasis, then said, “And he doesn’tknow of what he speaks.”

Biden never mentioned Trump by name. But his audience, smiling with approval, clearly understood the reference to the Republican presidential nominee’s frequent description of the U.S. commitment to NATO’s mutual defense pact as depending on whether the allies “pay their bills” for American protection.

Earlier in the day, Biden said the United States had pledged its “sacred honor” to Article 5 of NATO’s founding charter and would never renege. “The fact that you occasionally hear something from a presidential candidate . . . it’s nothing that should be taken seriously, because I don’t think he understands what Article 5 is.”

Biden’s trip here, designed to reinforce U.S. and NATO determination to stand against Russian aggression in Eastern Europe, fell on two anniversaries of major importance to the region. On Aug. 23, 1939, the foreign ministers of Nazi Germany and the Soviet Union signed the Molotov-Ribbentrop Pact, a nonaggression treaty that divided parts of Eastern Europe into “spheres of influence” and was quickly followed by Hitler’s invasion of Poland and the Soviet occupation of the Baltic states.

On the same date in 1989, more than 2 million people joined hands in a line across Latvia, Lithuania and Estonia – all then part of the Soviet Union – to demonstrate their desire for independence. All three formally joined NATO in 2004.

Dainis Ivans, a Latvian journalist and founder of the anti-Soviet Popular Front, introduced Biden by referring to Trump’s stated admiration for Russian President Vladimir Putin and “the darkest nightmare of many Baltic people . . . of a potential Putin-RibbenTrump pact.”

Biden held bilateral talks here with Latvian President Raimonds Vejonis and Prime Minister Maris Kucinskis, followed by a working lunch with the leaders of all three Baltic nations. The warm welcome he received was something of a respite before he heads Wednesday to what is likely to be a far more difficult visit to Turkey, another NATO ally.

The vice president will be the first high-level U.S. official to meet with Turkish President Recep Tayyip Erdogan since a coup attempt there last month. Some Turkish officials have alleged that the United States was involved in the unsuccessful uprising and has been insufficiently sympathetic to the subsequent arrest of tens of thousands of alleged coup backers in the military and across a wide spectrum of society.

The upheaval has shaken already difficult U.S.-Turkey relations and led to indications that Turkey is looking elsewhere for support. In the past two weeks, Erdogan has visited Putin, and Foreign Minister Mevlut Cavusoglu has exchanged visits with his Iranian counterpart, Mohammad Javad Zarif, amid reports that the three countries are working toward joint action in Syria.

“I don’t think we’re concerned that we’re at some tipping point bilaterally or with Turkey in NATO,” a senior administration official said of the relationship. “There’s a whole host of reasons why our partnership with Turkey remains as important as ever.” It is a view the administration believes Turkey shares, said the official, who briefed reporters on the trip under White House-imposed conditions of anonymity.

But officials traveling with Biden indicated they are unsure what kind of reception they will receive and how serious Ankara is about strengthening ties with Moscow and Tehran at the perceived expense of the United States. Biden is not bringing with him what the Turks say they most want – assurance that the United States will extradite Turkish cleric Fethullah Gulen, a U.S. resident they charge instigated the coup attempt.

A Justice Department team arrived in Turkey this week seeking clarification of Turkish charges against Gulen, the administration official said.

Russia and Iran, which support Syrian President Bashar al-Assad, have been on opposite sides of the Syrian civil war from Turkey, which has shared the U.S. view that Assad should step down. But Erdogan now says his government will work with Moscow and Tehran, at a level of coordination he has yet to specify.

Turkey, which shares a 500-mile border with Syria, is a key component of the U.S. strategy against the Islamic State. But the partnership has been fraught with difficulties and mutual mistrust, beginning with U.S. and coalition concerns that Turkey’s porous border has allowed free passage for the group’s fighters and supplies.

More recently, as it has been unable to build a strong enough Syrian Arab force to fight the militants, the United States has increasingly relied on Syrian Kurdish fighters, who are allied with Turkish Kurds engaged in a separatist war against the government in Ankara.

A year ago, the United States began using Turkey’s Incirlik air base for strikes against the Islamic State in Syria. Turkey agreed to the deal in exchange for pledges to limit the expansion of territory held by the Syrian Kurds along the border.

But the Kurds, aided by U.S. airstrikes, have now expanded westward in northern Syria beyond the limits the United States and Turkey agreed upon. Turkish media reported this week that the Turkish military has begun cross-border shelling of Kurdish forces that this month helped retake the Syrian city of Manbij, considered a crucial step in U.S. efforts to eventually oust the Islamic State from its headquarters in Raqqa.