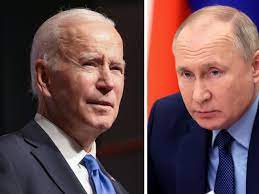 President Joe Biden warned Russian President Vladimir Putin in a video call Tuesday not to mount a new invasion of Ukraine and laid out the economic and security costs Russia would face if the Kremlin chooses to go down that path, as the White House attempts to forestall a renewed war in Europe.

Biden also offered a diplomatic route to end the war scare that has arisen since the Kremlin, for the second time this year, massed troops and materiel near the border with Ukraine, raising fears of an offensive far larger and more deadly than its invasion eight years ago.

The two leaders came out of the virtual meeting and tasked their teams with engaging in what the Kremlin called “substantive consultations” on “sensitive” European security issues, including Russia’s complaints that NATO is encroaching on its borders and conducting threatening activities on Ukrainian territory. In the run-up to the call, Russia had proposed starting talks on those issues.

During the two-hour call, Putin told Biden that NATO is “building up its military potential at our borders” and asked for “reliable, legally fixed guarantees excluding the expansion of NATO in the eastern direction and the deployment of offensive strike weapons systems in the states adjacent to Russia,” the Kremlin said in a statement.

White House national security adviser Jake Sullivan said Biden made no commitments or concessions on possible NATO membership for Ukraine, which for years has been seeking to join the U.S.-led military alliance.

Speaking in a briefing after the call, Sullivan said Biden “stands by the proposition that countries should be able to freely choose who they associate with,” and noted Washington would be compelled to back its NATO allies in Europe with new forces and equipment should Russia further invade Ukraine. He also described the possibility of lower-level follow-on talks Russia has been seeking.

“Formal agreements or formal treaties were not on the table in the conversation today, but the straightforward notion that the United States, flanked by our European allies and partners, would be prepared to talk to Russia about strategic issues in the European theater – that was on the table, and we are prepared to do that,” Sullivan said, noting Washington and Moscow did so during the Cold War.

“What the right mechanism for that is, what the agenda for that is, and what comes of that – that is all to be worked out as we see how things proceed in the coming days,” he added.

Sullivan declined to go into detail about what economic threats Biden set out for Putin, but he said the United States is prepared to take measures now that it wasn’t prepared to take after Russia’s 2014 invasion of Ukraine. He also said the United States has been engaging with both the incoming and outgoing German governments about what would happen to the Nord Stream 2 gas pipeline if there were an invasion.

“It is leverage for the West because if Vladimir Putin wants to see gas flow through that pipeline, he may not want to take the risk of invading Ukraine,” Sullivan said.

Those comments came a day after Undersecretary of State for Political Affairs Victoria Nuland told lawmakers in a closed-door briefing on Capitol Hill that the German government has informed the Kremlin it would suspend the pipeline if Russia once again invades Ukraine, according to congressional aides familiar with the exchange.

Nuland touched on that possibility again during an open hearing Tuesday, when Sen. Tim Kaine, D-Va., asked her if a Russian invasion would “tip the balance” and cause U.S. allies in Europe to end the pipeline, which runs from Russia to Germany and has yet to come online.

“I believe that it absolutely would, senator,” said Nuland.

Kremlin foreign policy adviser Yuri Ushakov told Russian media in the hours after Tuesday’s call that Nord Stream 2 didn’t come up at all during the conversation between Putin and Biden. Ushakov also said Putin didn’t mention any possibility of sending Russian forces into Ukraine.

In the eyes of the White House, the call didn’t put those fears to rest.

“We still do not believe that President Putin has made a decision,” Sullivan said. “What President Biden did today was lay out very clearly the consequences if he chooses to move.”

U.S. intelligence has found that Moscow may be planning a multifront offensive into Ukraine as early as next year involving as many 175,000 troops, according to U.S. officials and an intelligence document obtained by The Washington Post.

The tension comes against the backdrop of a conflict in Ukraine’s eastern Donbas region, which has been simmering for nearly eight years and, according to Ukraine, has left more than 14,000 people dead. Russia fueled a separatist rebellion in the region in 2014 after pro-Western demonstrators toppled a Kremlin-friendly government in Kyiv and took power.

During the call, Putin noted the lack of progress in the implementation of the 2015 Minsk agreements designed to end the conflict. He also accused the Ukrainian government of trying to dismantle the accords and those reached during the Normandy format talks, which include Ukraine, Russia, Germany and France, the Kremlin said in its readout of Tuesday’s call.

Sullivan said that the White House believes progress on ending the conflict can be made through the Minsk agreement and the Normandy format, and said there can also be a “larger mechanism” to address Russia’s broader concerns about NATO, as well as the U.S. and its NATO allies’ concerns about Russia.

In an interview with the Financial Times in April, Ukrainian President Volodymyr Zelensky called for changes to the Minsk protocol and suggested adding the United States and Britain to the Normandy format. Russia, meanwhile, has sought to work in the confines of those peace arrangements, which were made in part as a capitulation to Moscow aimed at stopping the bloodshed in eastern Ukraine.

In an email readout of the call, the White House said that “Biden voiced the deep concerns of the United States and our European Allies about Russia’s escalation of forces surrounding Ukraine and made clear that the U.S. and our Allies would respond with strong economic and other measures in the event of military escalation.” Biden also, the readout said, expressed his support for Ukraine’s sovereignty and territorial integrity, and urged a de-escalation and return to diplomacy.

The call went beyond Ukraine. Biden and Putin had “a good discussion on the Iran issue” during the call, Sullivan said, calling the talk “productive” and emphasizing how Washington and Moscow worked together despite tensions to produce the 2015 Iranian nuclear accords.

Biden briefed the leaders of Britain, Germany, France and Italy after the call and is planning to speak with Zelensky on Thursday, the White House said.

Both publicly and privately, administration officials have been hesitant to telegraph just how far the United States is prepared to go, including the potential use of military force, if Russia moves ahead and invades Ukraine.

Republicans have accused Biden of not going far enough to ward off the Kremlin and have urged him to provide the Ukrainians with more weapons. Sen. James Inhofe, Okla., the top Republican on the Senate Armed Services Committee, said in a statement after the call that “sanctioning Russia over this reckless behavior is important, but it is not enough” and called on the White House to send anti-air, antitank and counter-artillery weapons to Ukraine.

Though Ukraine’s ascension to NATO has long appeared remote, Russia is concerned about the extent of Kyiv’s cooperation with the alliance, including on military assistance, analysts said.

Amid the escalation, Russian officials have claimed that Moscow – not Kyiv – is under threat.

In an address to Russia’s Foreign Ministry board in November, Putin warned that the West has not taken Russia’s “red lines” seriously enough. He said the United States and its allies supply Kyiv with lethal weapons, conduct “provocative” military exercises in the Black Sea and fly strategic bombers close to Russia’s borders.

“No matter what the outcome of the Biden-Putin virtual summit, please remember that Putin invented this ‘crisis’ single-handedly,” Michael McFaul, the U.S. ambassador to Russia during the Obama administration, wrote on Twitter. “Nothing changed in Ukraine. Nothing changed regarding NATO policy.”

John Herbst, a former U.S. ambassador to Ukraine and senior director of the Eurasia Center at the Atlantic Council, said it is possible Putin’s main objective in massing forces by the border is not to invade but rather to intimidate the United States, Europe or Ukraine into some form of compromise.

Herbst said the most likely downside to these negotiations is that “in our willingness to prevent the nasty outcome, we give Putin something of value – so what he learns is that intimidation works.”

Dmitri Trenin, director of the Carnegie Moscow Center, said that even if Washington gave Moscow the guarantees it is seeking, “they probably wouldn’t be completely trusted by Russia.”

“The Russian strategy appears to be using military force deployments and movements to make the U.S. take Russian security concerns seriously and engage in a productive dialogue,” Trenin said.

Moscow regards Biden “as a sensible person who, all rhetoric aside, understands his responsibility when confronting a fellow nuclear superpower,” Trenin added.

The two leaders met in person in June, at a summit in Geneva, that included three hours of face-to-face talks but little in the way of deliverables. Still, at the time both sides dubbed the summit a success, saying it had achieved its goal of opening lines of communication between the two countries to head off potential catastrophes.