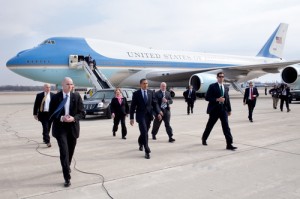 Hours after Donald Trump promised to kill the Air Force One procurement program, Boeing Chief Executive Dennis A. Muilenburg spoke with the president-elect, promising to work with the new administration and to keep the costs of the program down, according to a person with knowledge of the matter.

Early on Tuesday, Trump tweeted that the costs of the program “are out of control, more than $4 billion. Cancel order!” Later he told reporters that he thought the cost was “ridiculous. I think Boeing is doing a little bit of a number. We want Boeing to make a lot of money, but not that much money.”

The comments sent a shiver through the defense and aerospace industries, which had seen their stock prices soar after Trump’s election. Trump had pledged that he would rebuild the nation’s military and better equip troops with more ships, jets and weapons. But the tweet and the comments were signals that the companies that might benefit from that spending could just as easily be targets under the new administration.

The Washington Post had also just reported that the Pentagon buried an internal study that found $125 billion in bureaucratic waste for fear that Congress would slash its budget. And on Tuesday, Trump spokesman Jason Miller said Trump plans to carefully scrutinize the way the Pentagon spends money.

“I think this really speaks to the president-elect’s focus on keeping costs down across the board with regard to government spending,” he said. “I think people are really frustrated with some of the big price tags that are coming out for programs, even in addition to this one. So we’re going to look for areas where we can keep costs down and look for ways where we can save money.”

During their conversation, Muilenburg assured Trump that the company would work with Trump’s Pentagon on any requirement changes to the program in an effort to keep costs down. The call was confirmed by a second person, who was also not authorized to speak publicly about it. Trump himself confirmed the conversation during a Wednesday interview on the Today show.

So far, the Air Force has budgeted $2.7 billion for the Air Force One program, which includes two aircraft and is still in the development stages. That money is for research, development and testing – not manufacturing. Over the next few years, the Air Force expects “this number to change as the program matures with the completion of risk reduction activities,” it said in a statement.

In a statement, Boeing said it is only under contract for $170 million for work “to help determine the capabilities of this complex military aircraft.”

The real cost could grow to $4 billion, according to an analysis by Todd Harrison, a defense analyst with the Center for Strategic and International Studies. The aircraft are projected to be operational by the mid-2020s, officials said.

The planes, which go by the call sign “Air Force One” when the president is on board, cost so much because they can do so much, defense analysts said. They are able to safeguard the president in a crisis – even a nuclear attack, allowing him to direct the military from the air, speak with Cabinet members and communicate with the nation. The plane is able to be refueled while in flight, so that it can stay aloft for extended periods. And it has extensive radar and counterattack measures, officials said. Much of its capabilities are classified.

It is a “flying command post,” Harrison said. “In the event of a nuclear attack, this is where the military will keep the president safe.”

The “capabilities of this plane were there for everyone to see on 9/11” when Bush was whisked aboard Air Force One and responded to the crisis from there, said Richard Aboulafia, an aerospace analyst with the Teal Group.

In their call, Muilenburg and Trump also discussed trade and China, the official said. Boeing sells a large percentage of its jets to foreign countries, including China. If Trump instituted a tariff on China, the country could retaliate by limiting the number of Boeing jets it buys, Aboulafia has said.