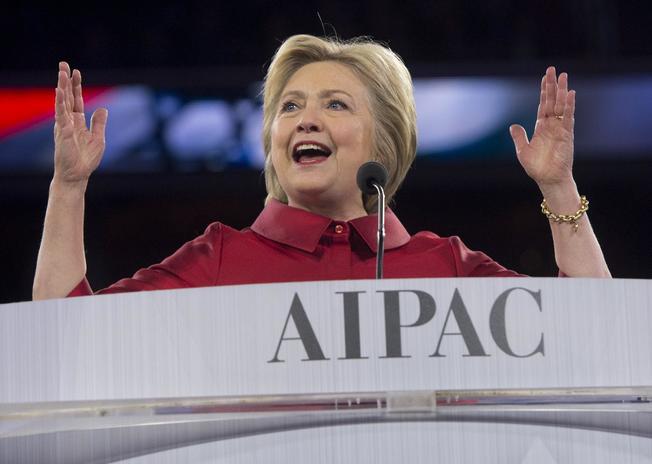 Hillary Clinton promised yesterday never to “pander to the gun lobby” as she assailed Republican Donald Trump as dangerous and hopelessly out of step with American public opinion about gun control.

“Enough is enough,” Clinton said, one day after the de facto Republican presidential nominee accused her of seeking to abolish the Second Amendment.

Before Trump addressed the National Rifle Association on Friday, its leader had said members could “kiss your guns goodbye” if Clinton were elected.

“Unlike Donald Trump, I will not pander to the gun lobby, and we will not be silenced and we will not be intimidated,” Clinton said at an anti-violence and gun control event named for Trayvon Martin, the unarmed Florida teenager shot by a Neighborhood Watch volunteer in 2012.

“We know the gun lobby is powerful. I believe it’s the most powerful lobby in Washington,” Clinton said. “And we know that some candidates will say and do anything to keep them happy.”

While Trump has shifted from being a supporter of some gun control to insisting Friday that he would allow no “chipping away” of the Second Amendment, Clinton has shifted the other way since her unsuccessful 2008 campaign against then-Sen. Barack Obama. Then, she spoke frequently about the importance of guns in some areas of the country and backed off her earlier support for national licensing and registration.

This year Clinton is making gun control a centerpiece of her campaign, pledging that she would act both with Congress and on her own to install what she calls “common-sense” limitations on gun purchases that are supported by a majority of Americans. She also has pledged to seek legislation to end immunity from many lawsuits for gun makers.

She insists she has no designs on the Second Amendment, and fact-checkers have discredited Trump’s assertion that she would seek to abolish it. Limited gun control is viewed by many Democrats as a winning issue in the fall election, drawing in moderate women. The issue can also be used to paint both Trump and Republicans congressional candidates as extremists.

“We are smart enough and strong enough as a nation to figure out how to protect the rights of responsible gun owners while keeping guns out of the hands of domestic abusers, other violent criminals, gang members, the severely mentally ill,” Clinton said Saturday. “I know we can do this and despite all the political noise, we are actually united on this issue.”

To applause, she ridiculed Trump’s pledge at the NRA annual convention to end gun-free zones at schools and undo executive actions that expanded requirements for background checks before gun purchases. She has pledged that as president she would broaden those background checks for now largely unrestricted sales online and at gun shows.

“This is someone running to be president of the United States of America, a country facing a gun violence epidemic, and he’s talking about more guns in our schools,” she exclaimed.

She noted that many Trump hotels do not allow guns on the property, and cited statistics showing broad national support – including from gun owners – for robust background checks.

“Each of the mothers is telling us something that we all need to hear, not just about our tragedies but about our country,” Clinton said. “Something is wrong when so many young people just starting their lives are dying.”