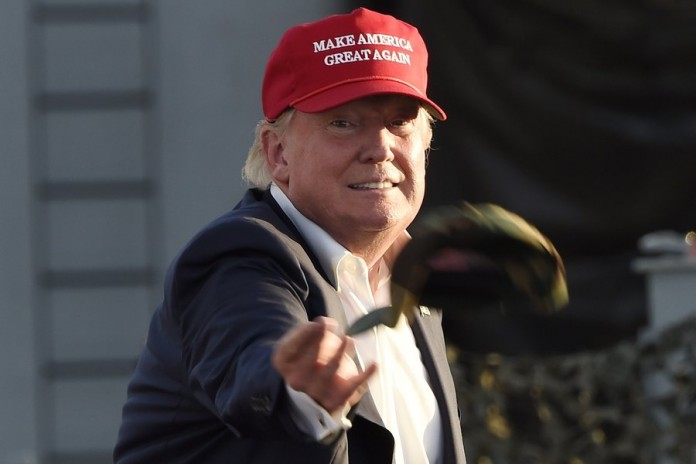 On Aug. 11 of last year, Donald Trump reacted to an incident in which Black Lives Matter protesters seized a microphone from Bernie Sanders. “That will never happen with me,” he said. “I don’t know if I’ll do the fighting myself, or if other people will. It was a disgrace.”

On Oct. 23, a Trump rally in Miami was consistently interrupted by protesters. Trump explained his strategy to the crowd. “See the first group, I was nice. Oh, take your time. The second group, I was pretty nice,” he said. “The third group, I’ll be a little more violent. And the fourth group, I’ll say get….out of here!”

On Nov. 22, Trump responded to an incident in which a protester was roughed up by people at a rally. “Maybe he should have been roughed up, because it was absolutely disgusting what he was doing,” Trump said. “I have a lot of fans, and they were not happy about it. And this was a very obnoxious guy who was a trouble-maker who was looking to make trouble.”

On Dec. 12, the campaign began playing an announcement at the start of campaign rallies. “If a protester starts demonstrating in the area around you, please do not touch or harm the protester,” an announcer states. “This is a peaceful rally.” When it was played at a rally in Feb., a reporter noted that the audience laughed.

On Feb. 1 of this year, Trump says that his security team told him someone in the audience was preparing to throw tomatoes. “If you see somebody getting ready to throw a tomato…” he said. “Just knock….out of them. I promise you, I will pay for the legal fees.”

On Feb. 23, Trump spoke at a rally in Las Vegas and mentioned an incident with a protester. “Here’s a guy, throwing punches, nasty…screaming at everything else, when we’re talking. . .,” he said. “I’d like to punch him in the face, I tell ya.”

He continued. “You know what I hate? There’s a guy, totally disruptive, throwing punches, we’re not allowed to punch back anymore. I love the old days. You know what they used to do to guys like that when they were in a place like this? They’d be carried out on a stretcher, folks,” Trump said. Later, he drew an analogy to waterboarding, which had come up in a debate.

On Wednesday, a protester being escorted out of a Trump rally was sucker-punched in the face by an audience member. This was not the first incident in which protesters had been physically attacked — not even this month. At the Republican debate the following night, Trump was asked about incidents of violence at his rallies, and he blamed the protesters. At a press conference on Friday morning, Trump repeated the same argument he’d made in the past.

“He was swinging, he was hitting people, and the audience hit back,” Trump said about an unspecified protester. “That’s what we need more of.” (A CBS reporter who follows the Trump campaign tweeted Thursday night that he had “yet to see a single protester start swinging as Trump just said.”)

There’s a reason we’ve documented those comments in the way that we have. To a casual observer, it gives the impression of a candidate that is, at times, explicitly encouraging violence against protesters at his rallies. This is perhaps not every example; Trump has held many rallies and protesters appear at most. But it suggests a pattern to a lay person.

Donald Trump is protected by the First Amendment and can say whatever he wishes. But there are boundaries to the protections the amendment offers, such as the hoary “fire in a crowded theater” example. There are also instances in which encouraging others to commit a criminal act — “incitement” — are legally prohibited.

Curious where the line was drawn in the case of Donald Trump, we spoke by phone with Hermann Walz, a practicing attorney in New York who is an adjunct professor at John Jay College of Criminal Justice and who served as a prosecutor in both Queens and Brooklyn.

In Walz’s estimation, Trump is in safe territory. “Short of Donald Trump saying something like, ‘Get that guy and punch him in the face,’ or something like that, I don’t see that he would have any real liability,” Walz said. “Otherwise, he would have to create the atmosphere and give the intention, without actually saying it, that it’s okay to beat these people up here in front of me.” In the latter example, Walz means something like separating out the protesters in one area and then suggesting that the people in that area should be considered possibly violent.

While the former example sounds a lot like his comments about the guy with the tomato, Walz thinks that Trump would have been in the clear had someone been attacked in that instance, too. “I don’t know that Donald Trump is liable for somebody else taking independent action” like knocking out someone holding a tomato. People are still responsible for their own behavior. And if the heckler were in the act of throwing the tomato, Walz thinks that stopping him is defensible regardless of what Trump says. You are likely to be given some leniency if you prevent a crime from happening. This is likely why Trump often frames his support for protester violence in the idea that his supporters are being defensive against violence, not offensive.

Even if Trump says “knock…out of a guy with a tomato” and then someone knocks out the guy with a tomato, Walz thinks it’s “a stretch” that Trump could be criminally charged — simply because there’s a gap between Trump’s non-specific reference to people throwing tomatoes and the person in the audience. (The guy who hit the tomato-thrower, however, would not be so lucky.)

To us, observing from here with all of the examples above, there’s a sense that Trump is creating an on-going environment in which he encourages violence. But that’s not necessarily the experience of people at the rallies. They are unlikely to know all of the times that Trump has disparaged protesters or embraced the idea of attacking them, Walz notes. “How do I know unless I go to all the rallies or watch them?” What’s more, the campaign’s announcement helps it defend against the insinuation of embracing violence. “I’m sure they’re doing that so that, a, so hopefully no one touches the protestors and, b, to cover themselves legally, because obviously that covers them to some degree,” Walz said.

Now, all of this is considering criminal liability. Trump could certainly be sued in civil court. But, then, Trump could be sued for any number of things. Walz indicated that he didn’t remember any example of incitement charges during his time as a prosecutor — in part, no doubt, because the law tends to err on the side of freedom of speech.

There’s little question that Donald Trump is comfortable with the idea that protesters encounter a physical response; he’s said as much repeatedly. But criminal charges always demand a higher bar, and, in this case, the expert with whom we spoke thinks that Trump is in the clear.

For all of the examples we offered at the outset, it’s the person who might throw the punch who is responsible.