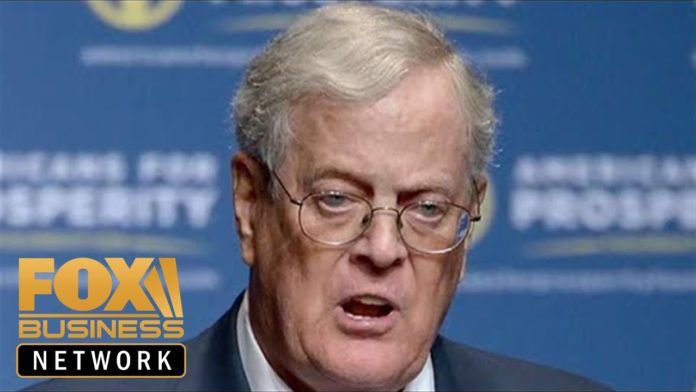 David Koch, a billionaire industrialist and philanthropist whose fortune and hard-edge libertarianism had a profound effect on American politics while making him an uncommonly polarizing figure, has died. He was 79.

Koch, who had suffered from prostate cancer for many years, announced in 2018 that he was stepping down from his positions at Koch Industries and the Koch political and philanthropic networks. His death was announced in a statement from Koch Industries. Information about the date and place of death was not immediately available.

Koch and an older brother, Charles, transformed the Wichita-based family company, which they had taken over from their father Fred in the 1960s, into a global conglomerate with interests in everything from petroleum and ranching to a wide variety of consumer products, such as Dixie cups and Stainmaster carpeting.

Koch Industries became the second-largest privately held company in the United States, and, by 2018, Charles and David Koch were estimated to be worth in the neighborhood of $60 billion each.

As a patron of charities, David Koch ranked among the most open-handed donors of his era, disbursing more than $1 billion to cultural and medical nonprofit organizations. But it was through a network of well-financed advocacy groups that the Koch brothers achieved their greatest distinction, spreading an uncompromising anti-government gospel that moved the Republican Party steadily to the right.

They had inherited a deep mistrust of big government from their father, a founding member of the arch-conservative John Birch Society. David Koch said he fervently believed that minimal government led to more prosperity and freedom for all people.

“It’s something I grew up with,” he told journalist Brian Doherty, editor of the libertarian magazine Reason, “a fundamental point of view that big government was bad, and imposition of government controls on our lives and economic fortunes was not good.”

In 1980, David Koch was the Libertarian Party’s nominee for vice president on a ticket with corporate lawyer Ed Clark. He aligned himself with a platform that called for the abolition of all corporate and personal income taxes, Medicare and child labor laws. When the ticket flopped at the ballot box, garnering 1 percent of the popular vote, the brothers pinned their political ambitions on the ascendant Reagan-era GOP.

The Kochs’ chief instruments were Americans for Prosperity, a nonprofit group founded in 2004 and technically dedicated to “social welfare,” and a series of semiannual conclaves that attracted some of the wealthiest conservative donors in the country. In the 2016 election cycle, the Koch network spent nearly $900 million, not much less than the total laid out by the Republican Party.

“It’s hard to think of another set of individuals who have had such an impact on our political system who haven’t been elected officials,” said Alexander Hertel-Fernandez, a Columbia University political scientist who has studied the Kochs.

Over time, evidence of the Kochs’ influence could be found in almost every corner of the political landscape. One of their most effective stratagems was the bankrolling of right-wing primary candidates for House and Senate seats. Among the beneficiaries was Joni Ernst, R-Iowa, an obscure state senator who was elected to the U.S. Senate in 2014 with the backing of the Kochs.

On the state and local levels, Koch money was credited with helping Republicans install majorities in 31 state legislatures by 2018.

The Kochs’ lobbying network consistently opposed mass-transit initiatives around the country, arguing that they were a government boondoggle. Critics were quick to point out that a continued reliance on the automobile benefited the Koch family’s business interests, which were heavily involved in carbon-based energy.

The Koch brothers also poured money into think tanks and other groups that promoted their agenda, including the denial of climate-change science. Greenpeace, which dubbed Koch Industries the “kingpin of climate science denial,” once ranked the company above ExxonMobil in working to scuttle legislation meant to reduce or reverse climate change.

With their opposition to government regulation, especially when it came to the environment, the Koch brothers were often accused of promoting naked self-interest under the cloak of a high-minded commitment to free-market ideology. Koch Industries came under frequent criticism for its environmental record. In 2000, the company was fined $30 million for oil leaks from its pipelines and petroleum facilities, at the time the largest fine ever levied by the Environmental Protection Agency.

Koch made no apologies for his opposition to government regulation, but insisted that the company took pollution seriously and bristled at being portrayed as a villain by Greenpeace and other environmental groups. “They’re attacking us as environmental criminals,” he lamented to New York magazine, “wanting to put me and Charles in jail.”

On some issues, including same-sex marriage and legalized abortion, both of which he supported, Koch hued to his libertarian outlook and departed from traditional Republican orthodoxy.

And when it came to businessman and reality TV star Donald Trump, who derided candidates who sought Koch money as “puppets,” the brothers made little secret of their distaste and refrained from supporting his presidential campaign in 2016.

Still they managed to seed the Trump administration with a healthy number of their allies, among them Marc Short, a former high-ranking operative in the Koch network who was White House director of legislative affairs for about a year and a half. Secretary of State Mike Pompeo’s congressional district covered Wichita when he was in the House, and he was widely known as the “congressman from Koch.” Vice President Mike Pence and former Environmental Protection Agency director Scott Pruitt were major beneficiaries of the Koch political machine.

To be sure, the Koch network was not always successful in its efforts. The brothers orchestrated a bruising campaign against the Affordable Care Act, also known as Obamacare, which was signed into law in 2010. Over the next two years, their network doled out $200 million to undercut Obamacare, efforts that ultimately led to the 16-day shutdown of the federal government in 2013.

Among Democrats, the Kochs became a shorthand reference to the malign influence of money in politics. “These two brothers are about as un-American as anyone I can imagine,” then-Senate Majority Leader Harry Reid, D-Nev., railed in 2014.

For many people, the affable and outgoing David Koch was the public face of the brothers’ political activity. At the same time, it was generally understood that Charles Koch, who served as the head of Koch Industries, was the driving force behind the scenes.

The exact total the brothers gave to political causes is not known, because much of it was “dark money” routed through nonprofit groups not required to disclose the sources of their funding. But estimates of those contributions range into the hundreds of millions of dollars.

The Kochs’ influence was also attributable in part to their organizational skills. In 2003, they began holding semiannual retreats at posh resorts, where wealthy conservatives flocked to discuss free-market principles, meet political candidates and pledge enormous sums to Koch-aligned entities. At the first gathering, barely more than a dozen guests showed up. By 2018, the gatherings were attracting more than 700 attendees.

Americans for Prosperity quickly evolved into the flagship of the family’s political operation as the brothers cemented their reputation as the keepers of the conservative social register. The network had operations in 34 states. After Barack Obama’s election as president in 2008, the Koch brothers’ network helped nurture the grass-roots conservative faction known as the tea party movement.

“They understood that American politics wasn’t just about what happens in Washington, D.C.,” Hertel-Fernandez said. “The states have enormous influence, and they’ve made a concerted effort to have a presence there.”

Critics branded their organizational web the “Kochtopus,” recognizing the reach of their tightly controlled empire.

David Hamilton Koch was born in Wichita on May 3, 1940. His mother, the former Mary Robinson, was a well-known figure in Wichita society, and his father was a chemical engineer and entrepreneur who prospered in oil refining.

His father was a strict disciplinarian who insisted that his four sons – Frederick, Charles and fraternal twins David and William – perform manual labor to foster a strong work ethic.

David Koch graduated in 1958 from Deerfield Academy, a prep school in Massachusetts, and then entered the Massachusetts Institute of Technology, his father’s alma mater, which was also attended by his brothers Charles and William.

He studied chemical engineering, receiving a bachelor’s degree in 1962 and a master’s degree in 1963. As an undergraduate, Koch, at 6-foot-5, was a standout on the basketball team, setting the school’s single-game scoring record.

After graduation, he worked for a series of consulting firms before joining the family company in 1970. He inherited $300 million in 1967, after his father’s death.

Over the years, the company was plagued by bitter sibling rivalries, with David and Charles Koch pitted against Frederick and William. In 1980, the latter two led an attempted takeover of Koch Industries. The gambit failed and led to years of acrimonious litigation.

In contrast to Charles, who enjoyed a staid family life in Wichita, the headquarters city of Koch Industries, David Koch chose to live for years in New York City. He relished his life as a freewheeling bachelor and frequent party host until what he described as a life-altering event in 1991: his escape from an airplane disaster at Los Angeles International Airport.

He was aboard a commercial airliner that collided with a commuter aircraft on the runway. Koch’s plane swerved into a building and caught fire. With smoke filling the cabin, he managed to force open a door and exit to safety. Thirty-three people died in the accident, and Koch suffered serious burns to his lungs.

“This may sound odd, but I felt this experience was very spiritual,” he told New York magazine. “That I was saved when all those others died, I felt that the good Lord spared my life for a purpose. And since then I’ve been busy doing all the good works I can think of.”

An immediate result was that Koch soon began dating Julia Flesher, who worked in the fashion industry. They married in 1996 and had three children. A complete list of survivors was not immediately available.

After the accident, Koch embarked on a wide-ranging campaign of philanthropic giving. Among the many beneficiaries of his largesse were various cancer research institutions, which received hundreds of millions of dollars, and the American Museum of Natural History and the Smithsonian Institution.

In 2008, he donated $100 million for the renovation of New York State Theater at Lincoln Center, the home of the New York City Ballet and New York City Opera. In all, Koch was estimated to have doled out at least $1.3 billion to scientific research and nonprofit arts groups.

Reportedly the wealthiest resident of Manhattan, Koch for years occupied, among other properties, a Fifth Avenue apartment once owned by former first lady Jacqueline Kennedy Onassis. In 2003, he traded up for a $17 million, 9,000-square-foot Park Avenue duplex.

In his later years, Koch took considerable pride in what he viewed as the successful effort to bring libertarian ideas into the mainstream, as well as his philanthropic giving. But he marveled at the differing legacies of those two ventures for him.

At the 2011 dedication of a new cancer research facility at MIT, to which he had contributed $100 million, he joked, “I read stuff about me and I say, ‘God, I’m a terrible guy.’ And then I come here and everybody treats me like I’m a wonderful fellow, and I say, ‘Well, maybe I’m not so bad after all.’ ”