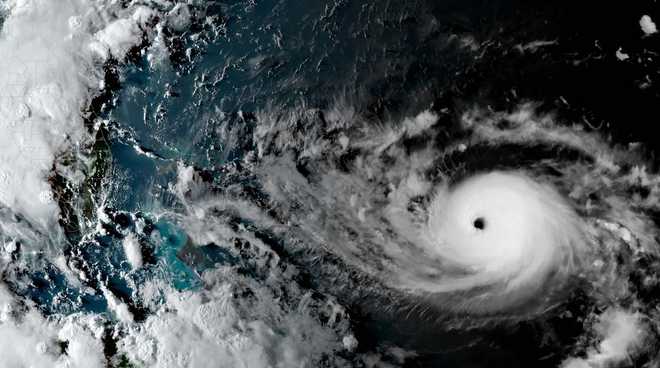 Democratic presidential candidate Marianne Williamson offered an unorthodox suggestion Wednesday for dealing with Hurricane Dorian: using “the power of the mind” to will the storm elsewhere.

Dorian has largely spared Florida the worst of its wrath, but it is forecast to make a much closer approach to the U.S. coastline between late Wednesday and Thursday, with Georgia and the Carolinas in its path.

The storm has devastated much of the Bahamas, where the official death count stands at seven but is expected to rise as authorities reach damaged areas. Nearly three out of every four homes on Grand Bahama are underwater, according to authorities, and aerial images of the island of Great Abaco show a pulverized landscape.

In a now-deleted tweet, Williamson, an author and onetime spiritual adviser to Oprah Winfrey, suggested that visualizing the storm’s retreat could be an effective way to change its course.

“The Bahamas, Florida, Georgia and the Carolinas . . . may all be in our prayers now,” Williamson tweeted, according to images posted by several Twitter users. “Millions of us seeing Dorian turn away from land is not a wacky idea; it is a creative use of the power of the mind. Two minutes of prayer, visualization, meditation for those in the way of the storm.”

Williamson’s campaign later explained that the tweet was not intended to be taken literally.

“It was a metaphor,” Williamson spokeswoman Patricia Ewing said in a statement. “When others speak of prayer and the mind it’s considered profound, but Williamson is held to a different standard. Because the comment led to confusion it was replaced. Everyone please pray for the people of the Bahamas, Florida, Georgia and the Carolinas. May the peace of God be upon them, may they and their families remain safe and their hearts be comforted as they endure the storm.”

Williamson herself tweeted a response to Yashar Ali, a journalist who had earlier posted an image of the deleted tweet along with the message, “Marianne Williamson has deleted this tweet.”

“Since you obviously want to debunk, counter or mischaracterize anything I do, would you like to have an honest and fair public dialogue?” Williamson said. “Since I’m neither crazy, irresponsible nor dangerous, I would appreciate the opportunity to counter the caricature.”

Williamson has previously drawn attention for some of her outside-the-box ideas and language, including her use of the phrase “dark psychic force” during a Democratic debate in July.

She is not the first presidential contender to reportedly offer a novel way to combat hurricanes. Late last month, Axios reported that President Donald Trump had suggested repeatedly to Homeland Security Department and other officials that they explore using nuclear weapons to disrupt hurricanes that were heading toward the United States.

Trump has denied making such a suggestion.