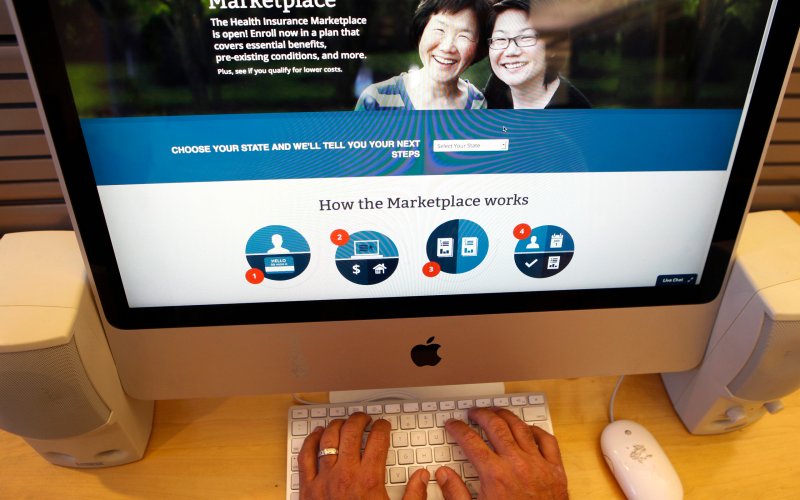 “Under #ACA, everyone’s insurance got upgraded & most can find a plan on the marketplace for $75/month or less.”

A number of readers asked about this tweet, which was a summary of comments made by Earnest during a White House press briefing. The tweet included a video of Earnest’s remarks, in which he said: “What is clear is that the vast majority of people all across the country will have access to a plan that costs $75 a month or less.”

Earnest made these comments in response to a question about a Washington Post report about how enrollment in the insurance exchanges established by the Affordable Care Act is at less than half its initial forecast. Officials say he was referring to people in the exchanges, not the population as a whole, when he referred to the $75 figure.

It’s important to remember that the Affordable Care Act is more than just the exchanges, which had a troubled start. The law established a core level of benefits, which as we have noted before has led to premium increases but also meant that many substandard plans were eliminated. The law also imposed an employer mandate, requiring employers to provide health care if workers worked a certain number of hours and if the staff was a certain size.

Most workers (about 155 million people) in the United States get their health care through their employer, so the exchanges, with some 11 million enrollees, are just a small part of the health-care market. Indeed, administration officials and independent analysts say that one reason that exchange enrollment has lagged is that more employers than originally expected have kept providing workers company-provided insurance rather than force them to seek health care on the exchanges.

That’s only a partial explanation. The Congressional Budget Office estimated in 2013 that 24 million people would be enrolled in the exchanges by 2016, with 6 million people being shifted from employer-provided policies. That still leaves an unexplained gap of 7 million, though administration officials point to the fact that more people than expected have signed up for Medicaid. (Also, one must accept that CBO’s estimates, as nonpartisan and careful as the analysts are, can still miss the mark.)

But the exchanges are under pressure because the mix of people signing up for health care under plans offered on the exchanges has been unhealthier than expected. The feared individual mandate has not had the expected result of convincing people to buy insurance, with younger and healthier Americans apparently more willing to pay a $695-per-person fine than sign up for health care they think is too costly. So the mix of people in the insurance pools have tended to be people who have chronic illnesses and thus require more care and frequent doctor or hospital visits.

A stable insurance market requires the premiums of low-risk people to help defray the cost of high-risk individuals. No one makes money selling insurance only to sick people; imagine if an auto insurance company only sold insurance to drunk drivers. So in a blow to the exchanges, some major insurance companies have pulled out of the market because they say they are losing too much money.

The risk pools are also why insurance companies have sought higher premiums and biggest deductibles. But government analysts say there is some evidence the risk pool may be stabilizing.

This brings us to Earnest’s statement: How is it possible for “most” people in the marketplaces to qualify for premiums of $75 or less?

It is because of government subsidies, according to recent research by an arm of the Department of Health and Human Services. Advance payments of tax credits help shield many participants in the exchanges from sharp premium increases because the law establishes the share of income that households are expected to pay. So even if premiums increased by 25 percent in one year, 73 percent of consumers could find coverage for $75 or less, the HHS report said.

But the subsidies phase out as income increases. Research by Avalere, a health-care consulting firm, shows that participation in the exchanges declines dramatically as incomes increase. More than three-quarters of eligible individuals with income at 100 to 150 percent of the federal poverty level (FPL) are enrolled in exchange plans, but just 41 percent of those with income between 151-200 percent FPL. Only 2 percent of those making over 400 percent of FPL participate.

Over time, as premiums continue to go up, people with higher incomes will be more exposed to higher costs, leading, potentially, to lower enrollment in those income brackets. Research also shows that consumers who do qualify for subsidies may have to switch plans annually in order to keep getting a good deal.

More people than originally estimated have chosen not to participate on the exchanges and instead buy “off-market,” directly from an insurance company. Those people do not qualify for subsidy, but they may not have bothered with the exchange because they know they won’t qualify. The CBO estimates that 9 million people purchase coverage outside the exchanges. That’s almost as many people as on the exchanges. (Note: some of these people may be still enrolled in plans that do not comply with the law but remain in place in some states because of transition rules.)

A similar dynamic also exists with deductibles. A study by the Centers for Medicare and Medicaid Services found that median marketplace deductible in 2016 was $850, down from $900 in 2015. Again, that’s because the government is helping to pick up the tab through cost-sharing and other financial assistance. One-third of enrollees in the exchanges have deductibles of less than $250, while over half have deductibles below $1,000.

Like many readers, we originally thought Earnest was speaking broadly, about all Americans. But seen in the context of his overall comments, it’s clear he was talking about people who participate in the exchanges.

That is increasingly a self-selected group – people who qualify for tax credits and cost-sharing that helps keep costs low for people who have incomes not much above the official poverty line. But for people who do not qualify for subsidies, premiums and deductibles are significantly higher.

We can understand the confusion of our readers, as Earnest did not make clear that he was including the impact of the tax subsidies. (Similarly, critics of Obamacare frequently fail to include the impact of tax credits when they discuss premiums on the exchanges.) The White House should be clearer about why premiums are so reduced for people buying insurance on the exchanges.