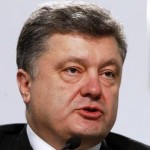 Exit polls show that Petro Poroshenkohas has won Ukraine’s presidential elections. The poll, which was conducted by three Ukrainian survey agencies, found that the candymaker billionaire won 55.9 percent of the vote.

Former Prime Minister Yulia Tymoshenko reportedly garnered 12.9 percent of the vote. If these percentages are confirmed, there will be no need for the runoff, which is scheduled for June 15.

During the elections, armed separatists in the eastern regions took over over polling stations, blocking some citizens from casting their ballots. Though turnout was around 40 percent in most of the country, just nine percent of citizens voted in the Donetsk region and no polls opened at all in the region’s capital city.

There are also fears that Moscow will use the low voter turnout in these regions to declare Sunday’s results illegitimate.

Ukrainians see the election as key for restoring stability to the country after President Viktor Yanukovych was ousted in the revolution. Interim Prime Minister Arseny Yatseniuk said a new president will turn Ukraine from “grey zone of lawlessness and dark forces … into a place where it is easier to breathe.” Read more.