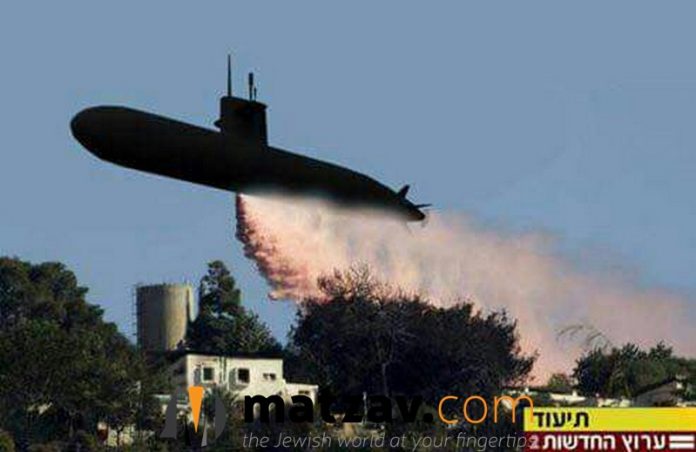 Four Arabs from the Palestinian Authority were arrested Thursday on suspicion of intentionally setting brush fires in the Jerusalem Corridor.

Shin Bet (Israel Security Agency) officials said the agency will investigate the possibility that several of the fires were, in fact, terror attacks.

Earlier Thursday, Public Security Minister Gilad Erdan suggested that up to half of the fires currently ravaging Israel were arson attacks. Erdan said high winds and dry conditions around the country meant a large forest fire could be started by a spark as small as a cigarette butt.

Arabic-language social media has been awash with celebratory cartoons, images and statements since the outbreak of fires Tuesday.

One Facebook post called the fires “Allah’s revenge” for Israel’s proposal to limit early-morning noise levels from mosques. On Twitter, one user named Salma tweeted “For the first time,fires makes me happy cause that’s what happens When U ban muslim call for prayer, U deserve it”, while another, Lateefa Khan, wrote, “When the devil isnt (sic) dragged to hell, hell comes to the devil.”

In addition, MK Basel Ghattas (Arab Joint List) responded to a post in which Education Minister Naftali Bennett wrote, “Only people who have no connection to this land could possibly burn it down.”

“Yes, Mr Bennett, you’re right. That’s why you’ve been burning our land for 70 years! You are foreign occupiers. This is our land!” Ghatttas responded. (Translation courtesy of Palestinian Media Watch).

More than 220 fires have broken out since Tuesday, beginning with Neve Shalom-Wahat al-Salam, a Jewish-Arab settlement near Bet Shemesh and spreading to other areas near Bet Shemesh, Mod’in, Judea and Samaria, the Jerusalem corridor, Haifa, Hadera, Zichron Yaakov, Umm al-Fahm, Lachish, Nesher, and the western Galilee.

Bayit Yehudi chairman and Education Minister Bennett declared, “Anyone who could even think of burning parts of the Land of Israel is not really connected to the land.”