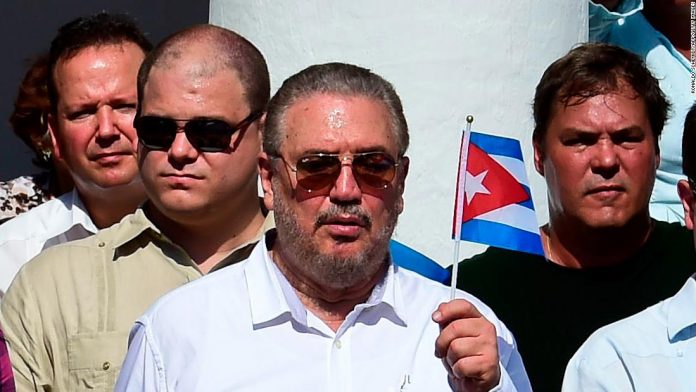 They called him “Fidelito” – little Fidel – partly because he was the spitting image of his father, Fidel Castro, the late Cuban revolutionary.

But that’s where the similarities ended.

Fidel Castro Diaz-Balart, the late Cuban leader’s eldest son, took his own life after a struggle with depression, Cuba’s state media reported on Thursday. His death at age 68 came after the bittersweet life of a bookish, Russian-educated scientist who maintained a complicated relationship with his father – who once publicly fired him.

The product of his father’s first marriage, to Mirta Diaz-Balart, Fidelito was a symbol of the complexities of the Cuban experience after the revolution. After an acrimonious divorce from Fidelito’s mother, his famous father kidnapped his young son while he was visiting him in Mexico, and after the boy’s mother had taken him to the land of Yankee imperialism – the United States.

“I refuse even to think that my son may sleep a single night under the same roof sheltering my most repulsive enemies and receive on his innocent cheeks the kisses of those miserable Judases,” the late Cuban leader wrote in a letter to his sister.

Later, after Castro remarried, Fidelito became but one more in a large brood of Castro children – who number at least seven, and as many as 11. Fidelito was also the cousin of the fiercely anti-communist Florida politicians, Rep. Mario Diaz-Balart, and former Rep. Lincoln Diaz-Balart.

Fidelito’s most public moment was also perhaps his worst.

In the 1980s, the elder Castro, who died in 2016, had tapped his son to spearhead Cuba’s nuclear power program. His brainchild: the Juragua Nuclear Power Plant, a Russian-backed complex meant to proudly power the communist island and provide a boost during hard economic times. The eldest son in the Castro dynasty suddenly seemed destined for greatness.

Those dreams came crashing down along with the Berlin Wall. The Soviet Union’s implosion robbed Cuba, for a time, of its greatest benefactor. At the same time, insurmountable technical and financial problems doomed the plant- which became an abandoned Cold War relic. The elder Castro publicly blamed on his son, who he unceremoniously fired in 1992.

“There was no resignation,” Castro declared at the time, according to Ann Louise Bardach’s book, Without Fidel. “He was fired for incompetence. We don’t have a monarchy here.”

Though Fidelito would later win new appointments – at the time of his death, he was scientific adviser to Cuba’s Council of State and vice president of the Academy of Sciences of Cuba – he never quite bounced back. Few considered him a serious player in the island’s politics, now ruled by his uncle, Raul Castro, who is set to step down in April.

Fidelito was never viewed, experts say, as a potential replacement.

“He had some physical resemblance to Fidel, but that was it,” said Arturo Lopez-Levy, a former Cuban government analyst who is now a professor of political science at University of Texas Rio Grande Valley. “He was never associated with the charisma that his father had.”

Granma, Cuba’s official communist party news service, published a short five-paragraph announcement, noting that Fidelito had undergone months of treatment for depression, including a period of hospitalization. He was an outpatient when he died Thursday morning.

The manner of his suicide was not disclosed.