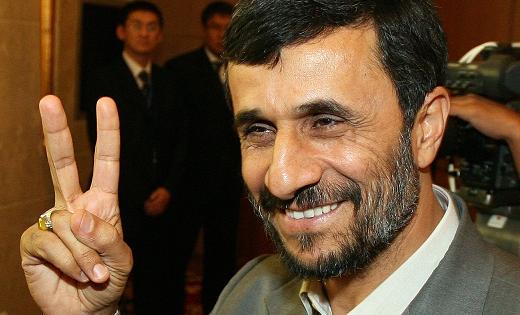 Former Iranian President Mahmoud Ahmadinejad appealed to US President Donald Trump to take the opportunity of his recent election to shed his predecessors’ behavior and policies, the regime-aligned news agency Tasnim reported on Sunday, along with the full transcript of a lengthy letter he wrote to the American leader.

“Unfortunately,” wrote Ahmadinejad, who headed the Iranian government from 2005 to 2013 – and was infamous for his call to annihilate both the US and Israel – “consecutive US administrations have assumed arrogance toward others, seeking progress of the state in holding others back, pursuing possession and welfare of US people in others’ poverty, questing its honor and grandeur in humiliating others, and searching US security in insecurity for others.”

In the course of his 3,445-word missive, Ahmadinejad, purported to be among the activists who took the US Embassy staff in Tehran hostage for 444 days, hinted that Trump should emulate the late Ayatollah Ruhollah Khomeini, father of the Islamic Revolution that ousted the Shah of Iran and ushered in the mullah-led regime that has been in power since 1979.

Ahmadinejad referred to Khomenei as a “unique figure,” a “leader who depicted the love and kindness of divine prophets to all human beings, and was the flag-bearer of freedom, justice and brotherhood for all nations. A great reformer who, from a divine-humane perspective, was the helper for all the oppressed and was the harbinger of peace, friendship and justice, heralding fundamental reforms to benefit all nations.”

Comparing himself to the US leader, Ahmadinejad said: “Your Excellency and I are, like other human beings, servants and creatures of The Only God, and have been created for an eternal life. God has not created us for enmity, hegemony and aggressiveness.”

Ahmadinejad, whose reelection in 2009 was purported to be rigged as part of the effort to violently quash the reformists who took to the streets to protest the repressive regime and support Green Movement leader Mir-Hossein Mousavi, went on: “Those elected by nations and the rulers should never consider themselves being superior to people, or being their masters and dominant over people’s affairs. The rulers’ capacity is but to be humble toward the people, to serve them, and to follow up their demands.”

He then continued by claiming that Trump “is well informed of the US history and the behavior of its rulers toward other nations, particularly over the past half-century. Levels of dissatisfaction from US rulers are so that a free election at any part of the world will result in the victory of the US government’s opposition.”

He based this assertion on Trump’s own criticism of Washington politics and the media “as corrupt and anti-public.”

“I hope you will be the first president of the United States of America who establishes novel changes to achieve people’s actual will,” he said, after pointing out that he had written such letters to Trump’s two immediate predecessors, without specifying Barack Obama and George W. Bush by name.

The basic question now is who has given the US government the mission to establish security worldwide?

What outcome has meddling in other’s affairs and military deployments to other regions and imposing thousands of US military, security and intelligence bases across the globe had, except for insecurity, war, division, killing and displacement of nations? Have the measures brought about anything beyond hatred and animosity toward US leaders, notoriety for the US people and imposition of military expenditures?

If all governments want to show behavior similar to the US administration, which visible horizon of peace and security will lie ahead of the human society? Isn’t it better to stop warmongering and not to interfere militarily in other regions of the world, in order to create an atmosphere of international understanding and to end the arms race, war and killing of people?

“War instigates war, and peace is never established by war. Killing only cumulates hatred. Sustainable peace and security will only be established by changing attitudes, beliefs and behavior,” he declared.

He then praised the United Nations and attacked the “dominance of consecutive US administrations over the global body [which] has obstructed its right performance. Time has come for the center for manifestation of collective- and- free will of nations to be set free from the destructive dominance.”

Finally, the world leader infamous for threatening to “wipe Israel off the map” accused the US of being behind global terrorism. “I regret to remind you that most of the known terrorist groups across the contemporary world have either been or are formed and reinforced by US security services, or have, halfway through, started to serve their goals… Enjoying a country developed, powerful, rich and effective in international relations, is what any nation would long for, but this wouldn’t mean forming empires and interfering in others’ affairs, or boasting and exercising hegemony toward other nations.”

Ahmadinejad’s letter was sent as the powers-that-be in Tehran have been stepping up threats against the new administration in Washington, alongside ballistic missile tests and massive military drills.

Harold Rhode, an expert on Islamic culture and former Pentagon analyst, who was a student in Iran when the revolution began, told The Algemeiner last month that the “mixed messages emanating daily from the mullah-led regime – some threatening and others more conciliatory – indicate that Tehran is running scared.

On Friday, ex-Foreign Ministry Director General Dore Gold, president of the Jerusalem Center for Public Affairs, said that rather than becoming more moderate — as promised by the Obama administration during its marketing of the July 2015 Iran nuclear deal — the Iranian regime is now “far more dangerous” than it was when it agreed to the Joint Comprehensive Plan of Action with six world powers.