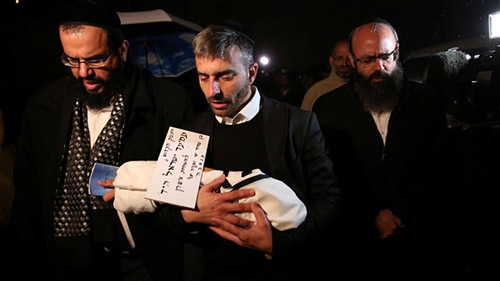 This Wednesday, the Ofer Military Court handed down four life sentences to Isam Barghouti, the terrorist who was involved in the shooting attack at the Givat Assaf junction in which IDF soldiers Yuval Mor Yosef and Yosef Cohen were killed, as well as the attack at the Ofra junction, in which the (then-unborn) baby Amiad Yisrael Ish-Ran was killed and his parents, Amichai and Shira, were wounded.

Judges Lieutenant-Colonel Tzvi Heilbrun, Lieutenant-Colonel Itai Adar, and Major Sebastian Osovski, stated that, “The perpetrator acted in a premeditated manner and showed no mercy. This is a clear case in which the Court must impose a life sentence. We believe that the perpetrator deserves such a punishment due to having intentionally caused death in such a manner. The actions of the perpetrator cut short the lives of two young victims and one other exceedingly young victim. Even after the verdict, the families of the victims will be left with their grief and bereavement, and will have to live with the thought of the difference between what should have been and what was,” they noted.