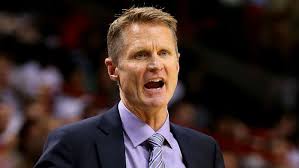 Golden State Warriors head coach Steve Kerr said the GOP “has sold its soul” to President Trump and called on Democrats to make things “right in 2020.”

The former NBA star made the assertion on Twitter on Wednesday night — marking the second time this week that he’s tweeted about the president.

“I believe the vast majority of Americans want a unifying, moral leader,” Kerr said. “The GOP has sold its soul to Trump, so the Dems have to get this right in 2020. Make this about jobs and unification. Period.”