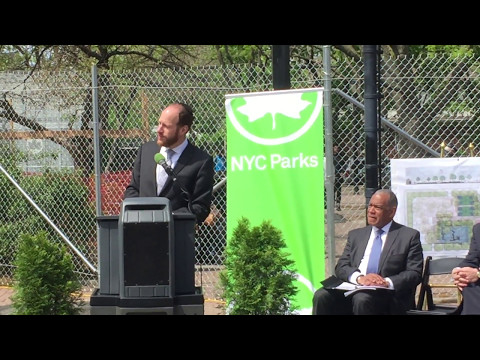 The park improvements will include a doubling of the existing playground with new swing sets, climbing equipment and a new spray shower, plus adult fitness equipment and a synthetic turf field and walking track. The multi-purpose play area will also be completely reconstructed with two full-size basketball courts for the many teens at Veretzky Yeshiva and Edward R. Murrow High School who use the playground.

Greenfield secured $3.5 million and Boro President Eric Adams secured $500,000 for a total of $4 million for the new park. The renovation will take approximately one year. In the meanwhile, the other half of the park including the children’s playground and seating area will remain open for the public.

“This park has not been touched in 25 years,” Councilman Greenfield explained. “I am proud to be the only elected official in New York who is renovating every single park in the communities they represent. It’s simple: parks are a fantastic investment in the future of our communities.”

Deputy Borough President Ryan saluted Greenfield’s tenacity, saying “Councilman Greenfield is doing something that no one else was able to do: renovate every single park in his district. As a former Council Member and as the Deputy Boro President, who is trying to help all of our parks in Brooklyn, I know what a great achievement that is,” said the Honorable Diana Reyna.

However, the most pleased members of the community were likely the students who came out to see how their local playground was going to be improved, with students from Yeshiva Veretzky and Edward R. Murrow High School in attendance. They were joined by Murrow Principal Allen Barge and Assistant Principal Christine Ingordo.

“Every child deserves a beautiful outdoor space to play in a clean and safe environment,” Greenfield said. “And every adult benefits from green space. Great parks lead to better health and makes for happier New Yorkers.”

Councilman Greenfield has already completed five new parks and playground in his district including the 18th Avenue Park and the Avenue P Park. This is the 10th parks project in his district that is now under construction. All told, Greenfield has secured over $35 million to renovate every single park in his Boro Park, Midwood and Bensonhurst district.