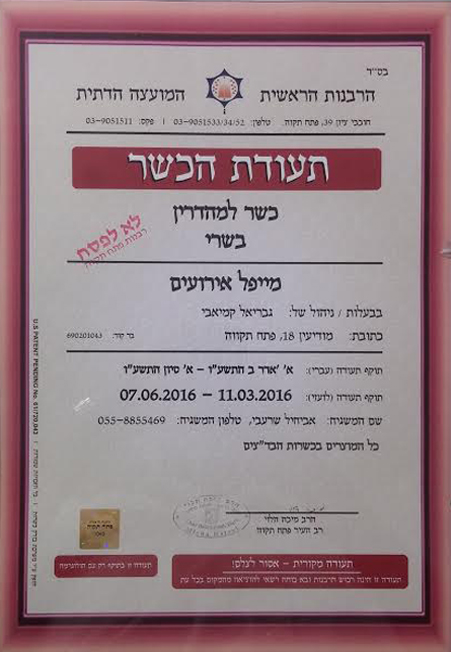 Following a High Court ruling that eateries may not advertise or present themselves as kosher even indirectly unless they have a rabbinate hechsher, the rabbinate began issuing final warnings to offending restaurants. Some had certificates from the Hashgachah Pratis organization which tried to circumvent an existing law against alternative hechsheirim by issuing businesses a Bris Ne’emonus document. By testifying that the place was under the auspices of Hashgachah Pratis but not mentioning anything about kashrus, the organization claimed that “a business does not contravene the law.”

The High Court ruling blocked this loophole by agreeing with the Chief Rabbinate that the correct interpretation of the Law Prohibiting Kashrus Fraud is “that any written declaration of kashrus was illegal, whether or not it actually mentioned words like ‘kosher.'”

“A national kashrus body exists with the duty to set the official standard for kosher food,” Chief Rabbi Rav Dovid Lau said. “Any decision which enabled the granting of alternative kashrus certificates, some of which are even fictitious, would lead to severe misleading of the public at large and I am glad that this has been prevented.”

Despite the ruling, CEO of Hashgachah Pratis Ayala Falk said the organization would continue issuing hechsheirim to its twenty-seven customers and that it was expecting a 28th restaurant to join soon.