The Flying McCoys bills itself as a “delightfully absurd comic panel [which] takes superheroes, office humor, huggable animals and twisted relationships, blending them in a bizarre marriage of Gary Larson, The New Yorker, Conan O’Brien and Mad Magazine.”

Hikind, however, completely disagrees with this description. In his letter, Hikind wrote, “A father telling his son to, “Stand back, son. I think Rex has rabbis” with two men dressed in religious garb similar to how many Rabbis dress, including black hats, black coats, beards and side curls, standing on either side of a dog is not just demeaning, insulting and repulsive but surely smacks of anti-Semitism á la Goebbels. 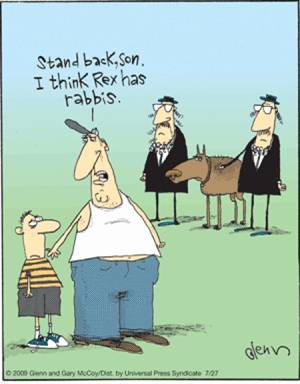 Hikind, a child of Holocaust survivors continued, “The arrests last Thursday by the FBI of 44 individuals… [is] no excuse to slander the entire Jewish people. To imply that Rabbis have rabies and are therefore contagious is to indulge in the vilest type of character assassination.”