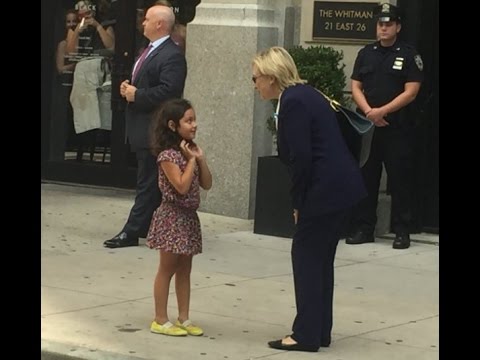 Hillary Clinton’s campaign says the Democratic presidential nominee was diagnosed with pneumonia on Friday, citing that as one reason why she collapsed after leaving during the 9/11 memorial in New York City. After the collapse, she went to her daughter Chelsea Clinton’s apartment, as a spokesperson for the campaign said that she played with her two grandchildren and visited with her daughter, Charlie Spiering reports for Breitbart.

It is unclear why Clinton decided to visit her daughter and grandchildren, despite later saying she has a disease which can be contagious.

After leaving the apartment, Clinton was filmed hugging a small child before leaving for her home in Chappaqua, NY. When reporters asked her what happened, she shrugged.

In an interview on MSNBC, Clinton spokesman Brian Fallon twice confirmed that aides watched Clinton at Chelsea’s apartment chasing around her grandchildren. “She was up running around at her daughter’s apartment chasing her grandkids around and within 90 minutes, people saw her out on the sidewalk,” he said. Read more at Breitbart.