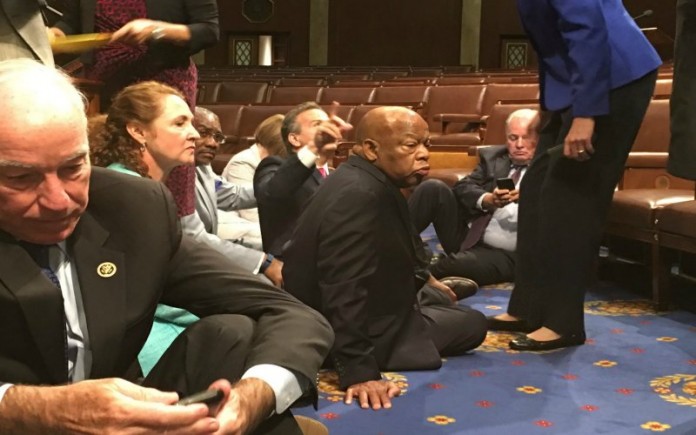 Democrats took over the House floor on Wednesday in an attempt to force votes on gun-control proposals, preventing Republican leaders from conducting the business of the day.

Chanting “No bill, no vote,” the group of House Democrats shouted down Republican leaders’ efforts to gavel the House into session and begin conducting the day’s legislative agenda following the opening prayer and the recitation of the Pledge of Allegiance.

Democrats, who gathered in the well of the chamber, began their sit-in around 11:30 a.m., with members coming in and out to lend their support. The group grew to about 80 members by 12:30 p.m. The assembled Democrats are demanding gun-control votes on measures that would prevent suspected terrorists from buying firearms and expand background checks. Several members also spoke in support of banning assault weapons.

Democrats took turns telling stories about gun violence in their home districts and decrying GOP leaders for not holding a single gun vote on the issue since the 2012 shootings at Sandy Hook Elementary School in Newtown, Conn.

“Every day we hear about somebody else being murdered with a gun,” said Rep. Mike Thompson, D-Calif., a chairman of the Gun Violence Prevention Task Force who noted he owns a firearm. “The Republican leadership will not allow these bills to come” to a vote.

Members were splayed across the well, leaning against podiums and chairs in a manner that would have earned them a reprimand if the House were in session.

The C-SPAN cameras, which are controlled by the House, were turned off and so were the microphones — leading some members to jokingly argue about who should take the next turn to speak based on who had the loudest voice. While it’s against House rules to take photos or video on the floor, at one point C-SPAN carried live footage of the sit-in via the Periscope feed of Rep. Scott Peters, Calif.

House Minority Leader Nancy Pelosi, D-Calif., pledged that Democrats would stay on the floor until they get a vote.

“We’ll be here as long as it takes, every day,” she said during a news conference on the steps of the Capitol. “This is the moment of truth.”

House Democrats appealed to rank-and-file Republicans to buck their leadership and join them — although by about 1 p.m., none had taken them up on the invitation. They also asked Speaker Paul Ryan, R-Wis., to come to the floor.

“The House cannot operate without members following the rules of the institution, so the House has recessed subject to the call of the chair,” said Ryan spokeswoman AshLee Strong. She did not say if Republicans had a plan to resolve the impasse with Democrats.

Pelosi said members were committed to holding the floor because after a series of mass shootings marked by prejudice — the recent attack on a gay nightclub in Orlando and the shooting last year at South Carolina’s predominantly African American Emanuel AME church – and homeland security concerns, members had reached a breaking point.

House Democrats are trying to stay “in sync” with the Senate in making their demands, Pelosi explained. That’s why the only two measures they are specifically demanding votes on would prevent suspected terrorists on the government’s watch lists from purchasing firearms and expand background checks. The Senate considered proposals on these two issues earlier this week.

“The others, we can’t say 85 to 90 percent of the public support,” Pelosi explained, adding that the chances of passing an assault weapons ban in this Congress are “hopeless.”

“But the other two shouldn’t be, because they are bipartisan,” Pelosi said.

Several Democratic senators, including Bill Nelson of Florida, Chris Coons of Delaware, Barbara Boxer of California, Patty Murray of Washington, Cory Booker of New Jersey and Chris Murphy of Connecticut, came to the House to join the sit-in. Some snapped photos of the gathering as it entered its third hour.

The gathering turned somber at times. At one point, Assistant Democratic Leader James Clyburn, D-S.C., offered a prayer. At another, members broke into singing the spiritual “We Shall Not Be Moved,” a song associated with the civil rights movement.

About 20 of the members involved in the sit-in left the floor to join Pelosi’s news conference. Rep. Bobby Rush, D-Ill., spoke about his son who was fatally shot in 1999. “It’s time to end this chorus of primal screams” from mothers finding out their children have been killed by guns, he said.

One such mother, Nardyne Jefferies of Washington, D.C., spoke at the end of the news conference, addressing Ryan and demanding a vote. She held up a graphic picture of her wounded daughter, Brishell Jones, who was killed at age 16 during a 2010 shooting.