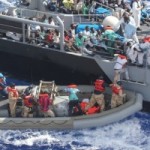 After hundreds of Middle Eastern and African refugees were barred from taking a train from Hungary to the Austrian border, many of them are now attempting to cross 106 miles into Austria on foot. Meanwhile, both Hungary and Bulgaria have reportedly asked Israel for advice on building a border fence to keep migrants out.

Israel, which has itself been dealing with a migrant crisis from Africa in recent years, has built a border fence near Egypt that has slowed the entry of African migrants into the Jewish state. An Israeli business source told Reuters that preliminary inquiries by both European countries have been made about purchasing Israeli-designed fences, which if implemented could be 15-20 feet high and installed with barbed wires as well as security cameras.

Israel’s border fence, installed along the country’s 143-mile border with Egypt, was completed in 2013. The fence cost approximately $380 million to build. Industry sources say that European countries may have to pay as much as 15 percent more to build such a fence along their borders due to the particular topography in those countries.

In Europe, the migrant crisis is becoming more severe each day. Antonio Guterres, the head of the U.N.’s High Commissioner for Refugees (UNHCR), called the EU’s response to the crisis as “unbalanced and dysfunctional” and warned that the EU will need to admit as many as 200,000 refugees as part of “a mass relocation program” with the “mandatory participation” of all EU member nations, the BBC reported.

Bulgaria, considered to be one of the EU’s most financially struggling nations, is facing a migrant problem that “is a lot bigger than it might look from the outside,” said Bulgaria’s interior minister, Rumiana Bachvarova, back in May, Politico reported. Hungary, which in recent weeks as become a more major entry point for many migrants seeking to get into other EU nations such as Austria and Germany, has taken a tough stand on the issue.

“Today we are talking about tens of thousands but next year we will be talking about millions and this has no end,” said Hungarian Prime Minister Viktor Orban, according to AFP. “We have to make it clear that we can’t allow everyone in, because if we allow everyone in, Europe is finished. If you are rich and attractive to others, you also have to be strong because if not, they will take away what you have worked for and you will be poor, too.”

On the other hand, the humanity of the migrants, many of whom are escaping war torn countries in Africa and the Middle East, has not gone unnoticed. This week, the photo of the lifeless body of toddler Aylan Kurdy, who drowned with his brother and mother and was discovered dead on a Turkish beach, has strung the hearts of people around the world.

“He only wanted to go to Europe for the sake of his children,” said Suleiman Kurdi, the brother of the grieving father Abdullah Kurdi, who was the only survivor of his family.

EU officials, by most accounts, so far oppose the idea of building fences to keep migrants out of Europe.

“When you talk about the management of migratory flows, the fence itself is not the solution, just as border control is not the panacea for migration flows. You have to stabilize the countries of origin from which the refugees flee,” said Izabella Cooper, spokeswoman for Frontex, the EU agency in charge of border management.

“[European countries] all want solutions and see the relevance of our technologies. But they also need EU support and this has not been forthcoming,” the Israeli source told Reuters.

Bulgarian and Hungarian officials have not denied the report that they have reached out to Israel for advice.

“I presume that such is the case because the cooperation between the [Israeli and Bulgarian] ministries of internal affairs and security is quite intensive,” said Bulgaria’s deputy ambassador in Israel, Rayko Pepelanov. The Algemeiner