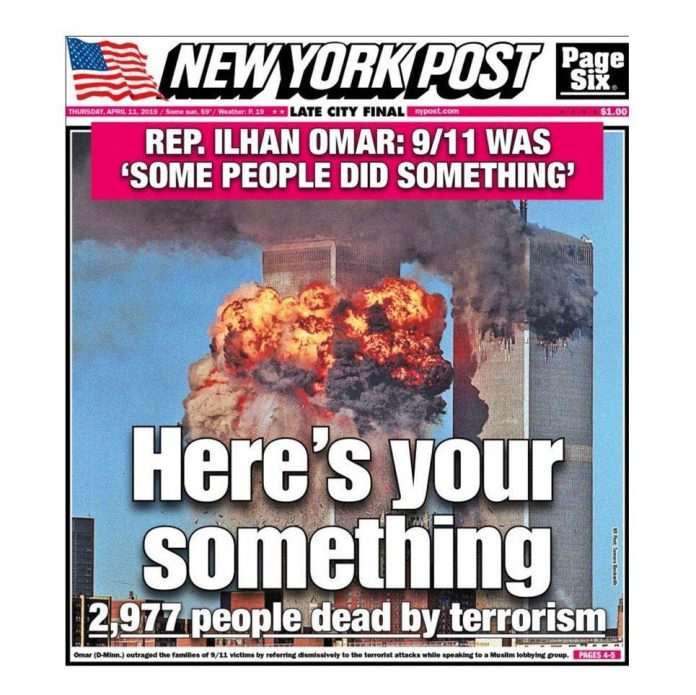 Rep. Ilhan Omar again sparked outrage and sharp criticism with a comment, this time for referring to the 9/11 terrorist attack that killed nearly 3,000 people as “something” that “some people did.”

The freshman Minnesota Democrat made the remark at an event last month in Los Angeles hosted by the Council on American-Islamic Relations. Omar mistakenly said the organization, which was founded in 1994, was started in response to the repercussions for Muslim Americans after September 11, 2001.

“CAIR was founded after 9/11, because they recognized that some people did something and that all of us were starting to lose access to our civil liberties,” Omar said in a video shared on social media while lamenting the “second-class” treatment of Muslim Americans. She said often “when Islam is mentioned” in America, people are “only talking about terrorists.”

“First Member of Congress to ever describe terrorists who killed thousands of Americans on 9/11 as ‘some people who did something,’ tweeted Rep. Dan Crenshaw, R-Texas, in response to the clip. “Unbelievable.”

McDaniel followed with another tweet saying Omar “has no business serving on the Foreign Affairs Committee.”