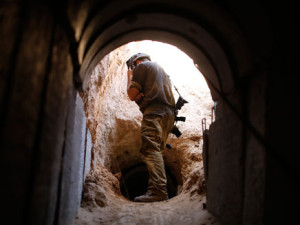 Israeli Prime Minister Bibi Netanyahu on Monday ordered a halt to Gaza-bound cement shipments, following the discovery of a Hamas terror tunnel under the Israel-Gaza border.

Israel had allowed cement to enter Gaza as part of the rehabilitation efforts there following Operation Protective Edge in 2014. Although some 10,000 buildings were damaged during that summer’s war, Hamas has used the cement mostly for military purposes.

Netanyahu also said Monday that a seaport would not be established in Gaza, adding that Gaza would only have access to the Ashdod port in Israel, enabling Israel to inspect all incoming cargo and make sure that Hamas does not smuggle in arms by sea.

“We support any form of humanitarian aid,” Netanyahu said. “But supervising a port is much more problematic. You won’t see love boats dock at such port [in Gaza]….I will not sacrifice Israel’s security for the sake of a good headline. I will not permit the establishment of a maritime artery to Gaza through which arms and terrorism will flow.”