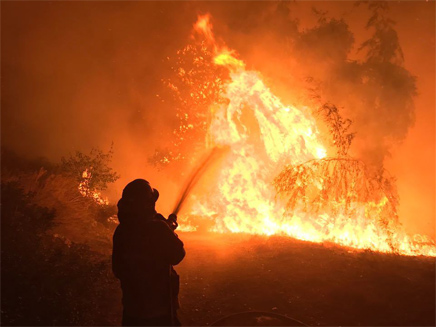 Israel’s Fire and Rescue Services, the Israel Police and the IDF have joined forces to fight a potential new wave of arson terrorism.

The “Red Flame” counterterrorism plan has been devised following the wave of fires that raged across Israel last November, including 1,773 forest and brushfires, 39 of which were classified as “major.” The fires forced the evacuation of nearly 100,000 people nationwide, and some 5,000 acres of land were destroyed. While a large number of fires were attributed to extreme weather conditions, about a dozen were classified as terrorist arson.

Israeli Public Security Minister Gilad Erdan announced Thursday he plans to form a team of law enforcement and security officials who will be tasked with devising ways to counter the arson threat.

In a recent letter to the Israel Police and the IDF, Fire and Rescue Services Commissioner David Simchi underscored the need to devise a response to the growing threat arson poses to Judea and Samaria communities near forests.

The state and the IDF “must combine their efforts in the area of civilian defense against arson attacks in a manner similar to the civilian defense against the missile threat and other terrorist threats,” Simchi wrote. He suggested mapping the communities most vulnerable to wildfires, making sure security forces and community leaders are familiar with seasonal weather conditions and wind patterns across Judea and Samaria, and introducing fire prevention plans.