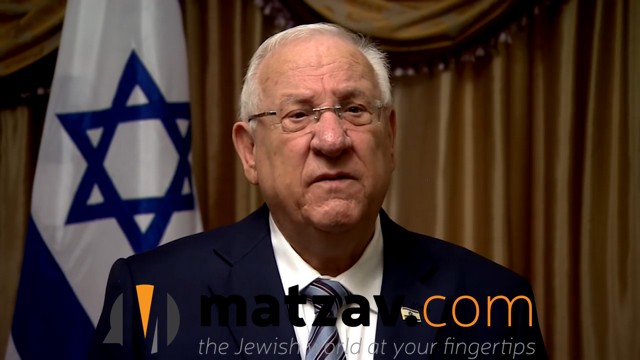 Israeli President Reuven Rivlin addressed on Thursday in Jerusalem the International Conference on Combating Antisemitism and the BDS Campaign.

The gathering — organized by the Israeli Ministry of Strategic Affairs — was attended by 350 people from 30 countries, including US Special Envoy to Monitor and Combat Antisemitism Elan Carr.

“BDS does not seek peace, or even to help our Palestinian neighbors,” Rivlin said. “It seeks to delegitimize Israel’s very existence. We must use all the tools at our disposal to defeat BDS — in the court room, in the board room, in civil society, in social media, in academia and in the halls of power. We must expose the modern blood libels spread by BDS and put a price on its hate and discrimination.”

“The State of Israel has no problem with legitimate criticism — criticism that flows from a true concern for Israel’s security and welfare, especially when this criticism comes from our sisters and brothers in the Diaspora. I believe that the government of Israel must do a better job of listening to your concerns. Honest criticism? Friendly criticism? Yes. Delegitimize Israel? No.”

Rivlin emphasized, “Today, especially, we must stand together against the growing threat of antisemitism, whether from the left, the right or radical Islam. Too often, the left tries to hide its antisemitism in the disguise of anti-Zionism. They try to present their campaign to boycott Israel as ‘progressive.’ There is nothing progressive about hate. There is nothing progressive about antisemitism. At the same time, we must show zero tolerance for antisemitism on the right, even when it comes from those who claim to admire Israel.”

“I am confident that we can defeat those who seek to undermine our Jewish and democratic homeland, and build a thriving future for Israel and the Jewish people,” Rivlin concluded.