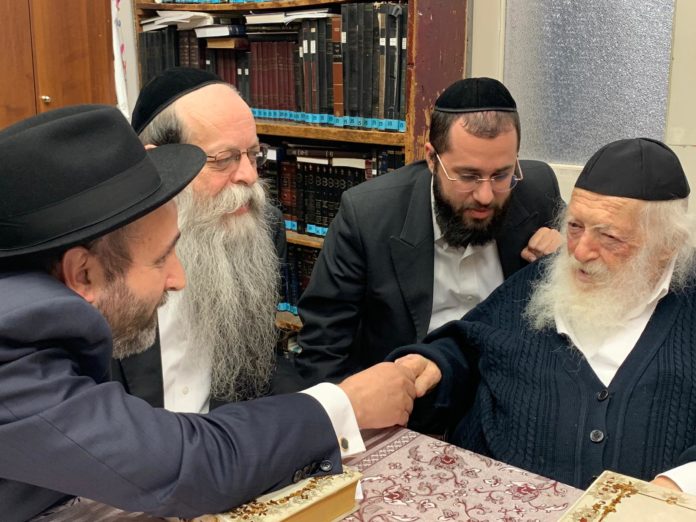 Over the last few hours, Rabbi Moshe Furer, noted askan from the United States, entered the home of Rav Chaim Kanievsky to discuss the current emergency global campaign to save Yeshiva Kiryas Melech-Tiferes Tzion, which is led by his son, Rav Shlomo Kanievsky. Rabbi Furer heard from Rav Chaim about his personal concern for the future of the yeshiva and the urgency of the current campaign.

Rabbi Furer made several phone calls to friends of his in America from Rav Chaim’s room, and after a few minutes, he announced, in Rav Chaim’s presence, that he was committing to raise $ 1.5 million from his friends and colleagues, provided that the public contributed a similar sum until the end of the campaign.

From the moment this announcement was made, each donation to the campaign is actually doubled.

This development has aroused great excitement in the campaign headquarters, as efforts continue to ensure that the remaining hours of the campaign bring in as many donations as possible.

With Rabbi Furer’s announcement, the next $1.5 million raised will double and become $3 million.

Rabbi Furer told those with him that the concern of Rav Chaim, and the anguish that the gadol hador is experiencing because of the crisis facing Kriyas Melech, motivated him to undertake this daunting task of raising such an amount.

Donations are still needed, as only a few hours remain before the end of this desperate fundraising campaign. Only about half of the fundraising goal being sought by the yeshiva has been raised, making Rabbi Furer’s commitment and the doubling of all remaining donations that much more vital.

Throughout the day, Rav Chaim has asked his confidants how the campaign is going. He has stopped his learning several times to inquire about the state of the campaign. His penetrating words, “My son’s salvation is my salvation” expresses just how personal this current effort is to Rav Chaim, who serves as the nosi of Kiryas Melech.

Now is your chance to make a difference – and have your donation doubled.