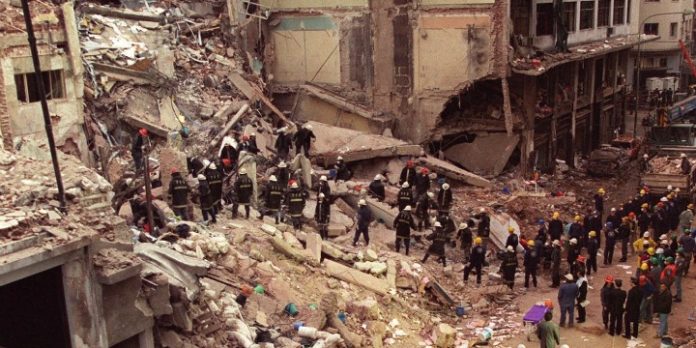 Saturday will mark the 26th anniversary of the deadly bombing of a Jewish community center in Buenos Aires in which 85 people were murdered.

The July 18, 1994 attack at the Argentine Israeli Mutual Association (AMIA) building was perpetrated by Hezbollah on behalf of its backer, Iran.

Major Jewish groups around the world are commemorating the atrocity with social media posts.

The World Jewish Congress (WJC) tweeted, “On July 18, 1994, a terrorist attack struck the AMIA Jewish community center in Buenos Aires, Argentina, killing 85 people. Julio Menajovsky was one of the first photojournalists on the scene. More than two decades later, he reunited with survivors and relatives of the victims.”

B’nai B’rith International tweeted, “Twenty-six years after the #AMIA terrorist bombing in Buenos Aires, there’s still no justice for the victims & their families.”

The European Jewish Congress (EJC) tweeted, “We mourn with the families of the vicitms of the #AMIA bombing in 1994 & join them in their mission to seek justice.”

The AJC also hosted an online program on Thursday featuring a conversation with the current president of Argentina, Alberto Fernández, who said his government was committed to bringing those responsible for the bombing to justice.

However, it must be noted that Alberto Fernández’s current vice president is Cristina Fernández de Kirchner, the former Argentine president suspected of illegally conspiring with Iran to cover up its role in the attack.

This matter was investigated by the late Argentine federal prosecutor Alberto Nisman, who was found dead in his Buenos Aires apartment in January 2015, shortly before he was supposed to appear at a congressional hearing to lay out his allegations against Kirchner.

Nisman’s death was originally depicted by Argentine authorities as a suicide, but it was later determined he had been murdered — a crime for which no one has yet been arrested. Some have accused Kirchner of being behind Nisman’s killing.